In an innovative move, Port Vale Chairman Bill Bratt has written to an American billionaire in a bid to rename Vale Park after Potteries inventor Reginald Mitchell. 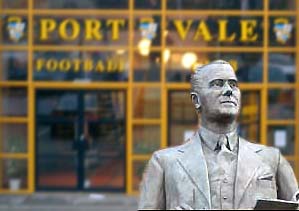 How Vale Park could look in years to come

According to reports on BBC Radio Stoke Bratt has sent a letter to American billionaire Sidney Franks to see if the Mitchell fanatic would be interested in sponsoring the stadium’s name change.

Renowned inventor Reginald Mitchell is one of the Potteries most famous sons after he invented the legendary Spitfire fighter – widely credited with winning the Battle of Britain in 1941.

Franks, founder of Sydney Frank Importing, is well-known for his largesse and generosity. He recently donated $100m to Brown University for a scholarship fund. Franks has long since been interested in the field of aviation and has greatly admired the genius of Reginald Mitchell. He believes it to be of the utmost importance that the man behind the Spitfire and its success should be better known and appreciated.

The billionaire is currently trying to increase awareness of Mitchell’s achievements by hosting a website (www.rjmitchell-spitfire.co.uk) dedicated to Mitchell, paying for Mitchell’s name to be included on a Battle of Britain Memorial and chairing the Reginald Mitchell society. He could be interested in the additional publicity that the stadium renaming could bring to his hero’s name.

Vale’s proposals include a Visitors Centre housing a spitfire aircraft at the ground, in addition to the renaming of the Vale Park stadium after one of the Potteries’ most famous sons.