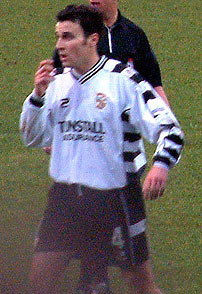 Sean McClare: Without a club
Musselwhite Released
Former Vale stalwart Paul Musselwhite has been released by Hull City. Musselwhite holds the record number of appearances for a Vale keeper and he is already interesting Boston United and Scunthorpe.

Gray Unsure
Striker Wayne Gray, who spent a brief loan spell at vale Park faces an uncertain summer as his contract with crisis club Wimbledon expires. Gray is unsure if the club can afford to offer him a new deal.

Blow for Mills
Lee Mills suffered a huge blow this week as he became one of Telford’s sacked players.

The former Vale striker was captain at Bucks Head, but following a financial crisis, Telford allowed most players to leave the club to ease the wage bill.

Mills was one of the final fourteen left at the club, when Directors took the drastic step of sacking all remaining players to ease the club’s growing money problems.

The move has courted controversy with the PFA declaring it “illegal” while the Board has defended its decision by claiming that the players’ wages were “Second Division wages” and therefore unsustainable.