In our series of players who could have featured for the club, we look at Port Vale’s failed pursuit of Chris Price in the mid 1980s. 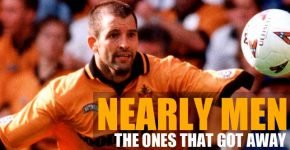 This is an occasional OVF series about transfer moves or signings that failed to materialise. In other words, players who perhaps in a parallel universe would have been playing for the Valiants… It covers failed Vale bids for (among others) the likes of Steve Bull, Keith Gillespie and Tom Finney

Note: this article has been amended on 10th September 2021

In 1986, Port Vale manager John Rudge was looking to compete in the Third Division. At right-back, Alan Webb was proving to be a reliable operator but in the new higher division, Rudge clearly felt he needed competition or an upgrade.  Rudge was looking for a long-term replacement who would also strengthen his squad.  His target was reliable Hereford United right-back Chris Price. The 26 year-old had made well over 300 appearances for Hereford. Rudge put in a bid but there was a rival offer from Blackburn Rovers, then a division higher than the Valiants.

Price opted for Rovers and it turned out to be a wise career move. Once again, Rudge’s ability to see a player’s potential was borne out as the right-back’s career took off (but unfortunately not in a Vale shirt). Price helped Blackburn to promotion to the top-flight and spent several seasons as a first division player for both Rovers and Aston Villa.

Luckily for the Valiants, the club didn’t regret the transfer too much as Rudge was about to pull another rabbit out of the hat. In 1988, Rudge brought in midfielder Simon Mills, converted him into an elegant right-back who made a contribution during the Rudge glory years.

Price also had an illustrious career finishing with well over six hundred appearances over a long professional stint. He came up against the Valiants on several occasions including an appearance for Aston Villa in a FA Cup game in 1990. The matchday programme from that game reveals Price’s side of the transfer saga:

Image of Chris Price by kind permission of Talking Bull