Valiants! As we near the end of this most unprecedented of seasons it’s time to look to the future and say thank you to YOU – our magnificent supporters.

Despite the fact that supporters have not been allowed inside Vale Park the vast majority of our Season Ticket holders have remained incredibly loyal and kept their money in the club.

This investment in Season Tickets has been absolutely vital for your club during a prolonged period where Port Vale has received no match day or hospitality revenue.

We are looking forward to welcoming you back and want to thank you for your incredible support over the last year.

Next month every supporter who kept their Season Ticket money in the club will receive a thank you pack containing the following:

In addition, all Season Ticket holders who kept their money in the club will be given complimentary access to two additional games (both EFL Trophy home group matches) if they renew for the 2021/22 season.

Before the new season kicks off we will also be unveiling a new ‘loyal Valiant’ thank you banner inside the club listing the names of all Season Ticket holders who kept their money in the club this season.

In addition, all these names will be entered into a prize draw to win a VIP match day experience – including a meal with owners Carol and Kevin Shanahan.

On our ‘loyal Valiant’ Bank Holiday weekend (May 1 to 3) supporters will be able to visit the club shop and ticket office to finally collect their unused 2020/21 Season Tickets and ‘Covid seating’ Season Tickets (as many like to save them) – along with their thank you packs.

Over the Bank Holiday weekend (May 1 to 3) the club shop will also be offering 20 per cent off all merchandise, rather than the usual 10 per cent, for Season Ticket holders who kept their money in the club.

Port Vale Season Tickets for next season will be on sale from this date (May 1) and we are pleased to announce that, despite the financial challenges facing the club, prices will remain frozen for the fifth year in a row.

Port Vale co-owner and Chair Carol Shanahan OBE said: “Much has been said and written about the challenges clubs have faced this season and the future is far from certain.

“What is beyond question, however, is the incredible loyalty and commitment shown by Port Vale supporters – particularly our Season Ticket holders – who have kept their money in the club despite being unable to attend matches.

“As a club it is so important that we say thank you to them and add value because this investment has been crucial during a time when match day and hospitality revenue has disappeared.”

Because of Covid, the later launch of our Season Tickets means that there is a shorter period for supporters who wish to use a payment plan option.

However, supporters can take advantage of our three-month Super Vale Saver plan.

The Port Vale club shop (pvfc-shop.com) also sells £5, £10, £20, £30 and £40 gift vouchers which can be redeemed against the price of a Season Ticket or club merchandise and provide the ideal gift.

Prices are as follows: 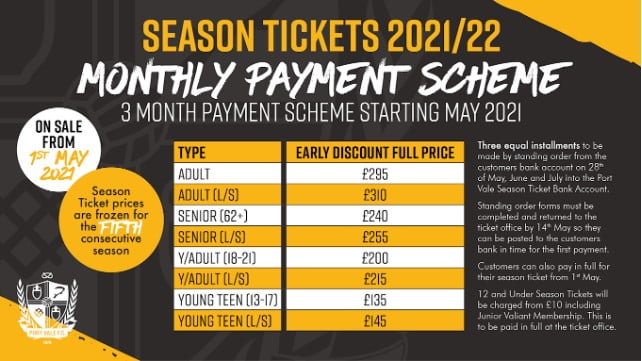 Port Vale confirm 1,150 season tickets have already been sold for next season