Burnley’s thrashing at the hands of Manchester City has seen them equal Port Vale with a unwelcome record.

Man City’s 5-0 win means that they become the second team in Football League history to win four successive home matches by at least five goals against a single opponent in all competitions.

The previous record was held by Notts County for their run against Port Vale between 1893 and 1907. 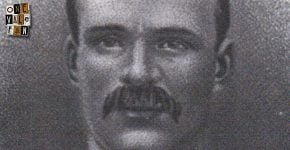 What were the results?

For the record (and take a deep breath here) the results were:

This game capped a miserable spell for the Valiants who 19 days earlier had lost 8-1 to Man City. Billy Beats (pictured) scored the consolation goal against County

There were mitigating circumstances here as three players failed to make the game for the Valiants. A consolation was that 25 days later Vale beat Leicester Fosse 7-1.

This was a miserable season for Vale who lost the home game to County 4-0. Richard Evans and Ernest Beckett scored the Vale goals in the away game. The Valiants were relegated at the end of the campaign.

This was an FA Cup second round tie and the first leg had finished 2-2 at the Old Rec. Both ties attracted around 10,000 fans.

However, Burnley fans can perhaps take heart from Vale’s performance. In their next fixture in February 1921 the Valiants won 1-0 with Tom Page scoring the winner.