Can John Askey’s side build on their win over Oldham Athletic with a home victory against Cheltenham Town?

After their recent blip, it is worth considering that the Valiants have lost just the one game at home this season. However, opponents Cheltenham should be a tough task as they have lost just once in their eight games and during that time they’ve won three away from home.

After the display against Oldham, it’s possible that John Askey will stick with the same starting XI. The key question will probably be whether two games in a matter of days will be too much for the returning David Amoo (pictured). The last thing Vale will want is a recurrence of the hamstring injury after his impressive display on Saturday. However, it’s possible that this game will come too soon for the likes of Zak Mills, Harry McKirdy and Mark Cullen.

Tom Conlon looked back to his best on Saturday as he played in a more advanced position. Vale fans will be hoping he’ll continue his improved form on Saturday possibly in partnership with Scott Burgess with whom he formed a formidable partnership towards the end of last season .

Cheltenham will be missing Matty Blair after he was injured at the weekend. Manager Michael Duff has said his “squad will be used” after the Robins picked up a number of injuries in recent weeks.

Powerful striker Reuben Reid will be well-known to Vale fans. The 32 year-old will put the likes of Leon Legge and Nathan Smith under plenty of physical pressure and will be hoping to add to the four goals he already has this season.

Belfast born Michael Duff made over 600 appearances as a player before landing his first managerial role with Cheltenham Town in 2018. He’s done a grand job so far after guiding the team to the play-offs last season and with a win ratio of 42%.

They are a good team and John (Askey) has done a brilliant job since he’s gone in there. They have an identity now, with the way they play…

Port Vale goalkeeper Scott Brown (pictured) is rightly regarded as a club legend by Cheltenham after playing over 350 times for them. Vale will also come up against an old boy in the Cheltenham defence with former youth team graduate Charlie Raglan a regular in the centre. 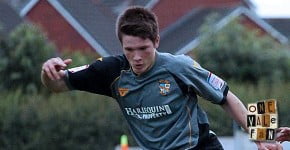 It finished in a goalless draw at Cheltenham in March. The game at Vale Park also finished in a draw this time 1-1. The Valiants also played Cheltenham in the FA Cup last season and won thanks to a memorable quickfire hat-trick from Tom Pope (pictured)