We’re going to show the entire ninety minutes of Port Vale’s April 2005 League game with Stoke City  on our YouTube channel from 7:30pm on Monday night. 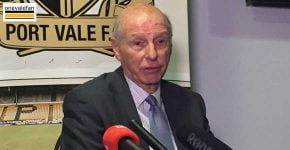 Despite our choice of top image, this ISN’T the game where a certain Port Vale midfielder scored a goal in the opening seconds. This game comes at the end of the 1994-95 season and took place at the Victoria Ground. John Rudge’s Valiants had picked up two wins in their last four games as they battled to beat the drop but badly needed a win over their rivals to stretch away from the relegation spots. Vale had Andy Porter and Robin van der Laan in midfield while top-scorer Martin Foyle would end up with 20 goals that season. The Valiants had also added new signing Ian Bogie to their side in March.

Every Monday evening, we have been showing some vintage Port Vale games IN FULL for your entertainment. Not all games are available to watch again, but you can see reruns of games including complete re-runs of Autoglass and LDV Trophy finals through this link

Watch the premiere live with other fans at 7.30pm. You can watch the clip anytime after Monday or click below at 7.30pm to join the premiere: