Port Vale Fail Michael Brown: Despite a stellar playing career for clubs in the higher leagues, his spell as Port Vale manager was widely seen as a disaster… 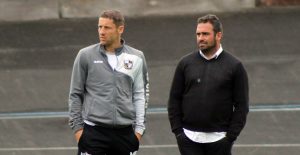 Brown had a decent spell as a Port Vale player especially during his first season when he netted six goals. He also had to work as manager by picking up the pieces of the failed Bruno Ribeiro “revolution” while under the controversial and often chaotic reign of then owner Norman Smurthwaite.

Well there’s a fair amount. Ribeiro left on Boxing Day so Brown was in charge during the catastrophic January transfer window of 2016 when Vale lost key players Anthony Grant and Jak Alnwick without replacing them. It went a long way towards sealing relegation.

Brown’s transfer tactics were decidedly dodgy. There was a tendancy to bring older players he’d played against. The likes of Ryan Taylor, Andre Bikey, Danny Pugh, Michael Tonge, Lawrie Wilson and Antony Kay were never going to be long-term signings. His loan dealings were baffling. He brought in three wingers which left the side unbalanced while bringing in six loanees meant that one of them had to be omitted to keep within League rules. Finally, the likes of Rob Lainton and Tyrone Barnett came in with wretched injury records. In Lainton’s case, it meant that Vale lacked a settled first-choice keeper with Brown using seven different goalies over his nine month reign.

Brown’s team was in real danger of going out of the League when he was dismissed in September 2016. Luckily his replacement Neil Aspin kept the side up. However, Brown failed to endear himself to fans when he moaned about his budget after he was dismissed. According to Brown it was “£1m under” the 2012-13 season’s budget – a somewhat unlikely claim as Vale had only recently exited administration that season. What is not for debate is that the stats show that Brown’s win ratio of just under 18% was one of the worst in the club’s history.