Port Vale defender Shaun Brisley could be out for more than a month after picking up an injury in the 2-2 draw with Walsall last weekend.

The club have revealed that the central defender could be out for 4-5 weeks with a knee injury.

The news will be a huge blow for the player who has been in such impressive form he has kept usual first-choice Nathan Smith out of the central defence.

Smith will undoubtedly return to central defence to replace Brisley with James Gibbons returning to the right-back slot after serving a suspension.

The Valiants will no doubt be keen to see Adam Crookes return to full fitness following the news of Brisley’s injury. Vale have a recall clause for Kieran Kennedy but Crookes can also play in central defence and could be useful cover during his injury spell. 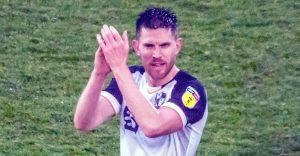