The Port Vale fans on the onevalefan.co.uk forum are in agreement – Vale put in a terrible performance in losing 3-0 to Swindon Town on Saturday afternoon.

After a game of few positives, here are the thoughts of a selection of fans on our dedicated match thread… 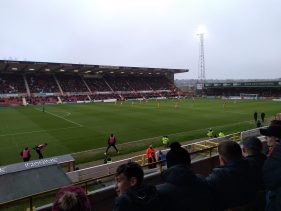 “It was awful and a fair result. It was an even game until Smith went off where they hadn’t had a shot, then the next 10 minutes saw Brown make two good saves and concede two goals. It shows how bad we were as Smith was our MOTM and he was only on the pitch for about 25 minutes…”

“I attended and we were absolutely dreadful. It was even for the first 10/15 minutes until Grant decided he fancied running the show. He had on us toast and made us look like amateurs today. Smith went off and we fell apart at the seams. 3-0 flattered us. There were several good stops from Brown and bar Cullen’s squandered effort we created absolutely zero, failing to test Benda once…”

“Personally I thought too many weren’t up to the battle or had the desire to first off go and win their individual battles. Having said that Swindon came out and were dreadful for the first 20 minutes, their left hand side was awful, they couldn’t keep the ball in play, but we didn’t capitalise on their shaky start by pressing them ourselves… Few players came out of it with too much credit. Brown obviously. I thought Gibbo did well and kept going and found himself in some good areas second half. Burgess in spells was easily our best of the midfielders. But other than that I’m struggling…”

“Losing Taylor has upset the balance plus we miss his goal threat. We need to be physically much stronger and tougher mentally away from home. For me this is the main reason we’ve chucked so many points away this season…”

Disagree or agree with these comments? Want to add your thoughts on the game? Click below to join the discussion:

Click for our dedicated match thread on the forum