Things are looking promising upfront for the Valiants as a new boy scores and impresses on his debut.

The Football League Trophy may not be everyone’s idea of a dream fixture but for the 1,008 hardy souls watching the Valiants beat Shrewsbury 2-1, there was a silver lining.

New signing Jordan Archer came on and showed that Vale now have the option of a forward with pace and power. His goal was a poacher’s effort after strike partner Mark Cullen miscued but it was Archer’s overall play which impressed the small Vale Park crowd.

The new signing showed strength on the ball and a nice turn of pace as he caused the Shrews backline problems during his half an hour cameo. Difficult to knock off the ball, he ran the channels with finesse.

Fellow forward David Amoo continued his potent run with another goal which means that in complete contrast to last season, Vale have a wealth of forwards to pick from.

If they want power and traditional targetman values there is the pair of Richie Bennett and Tom Pope; Mark Cullen is still gaining match fitness but has shown glimpses of being a withdrawn forward who can link up play, while the likes of Amoo, Worrall, Montano and the still to be seen Rhys Browne can offer pace and trickery on the flanks.

However, it could be that Archer may trump them all. It’s clearly very early days but have Vale unearthed a tall, powerful, pacy centre forward with the potential to get better. Only time will tell, but Archer could not have done much more to impress on his debut for the club. 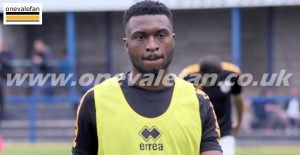 Port Vale forwards push their claims with goals for the reserves