Port Vale manager John Askey says that some squad players need regular football and he will be looking to send them out on loan.

Vale have added new faces in Shaun Brisley, Jordan Archer and Jack Taylor to their squad, which means that some players are unlikely to get first-team football with the club.

Askey has already loaned out Alex Hurst and Joe Berks and has already said that Lucas Green-Birch and Danniel Trickett-Smith both need a loan spell.

Now the Vale manager has added summer signing Scott Burgess, yet to play in the first-team this season and young left-back Ryan Campbell-Gordon to the list of players avaulable on loan.

Askey told the media: “I think we need to try to look at that and try to get one or two out because there is nothing worse than training and not playing.

“So, such as Dan and Ryan Campbell-Gordon and possibly Scott Burgess need to go out and play, if they can get in the Conference or just below and do well.” 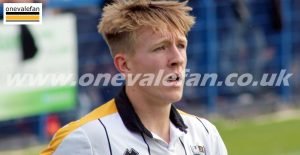