He did at least manage seven goals in 28 games and the club was in chaos when he joined.

Lots. He replaced a firm fans favourite and proven goalscorer, he cost a transfer fee, he helped the club to relegation and finally he did a runner the next summer. 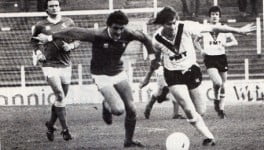 If one signing sums up Port Vale’s dreadful 1983-84 relegation season, it would be that of Martin Henderson.

A Scottish striker, who had won two league titles in Sotland, Henderson joined Port Vale aged 27, when he should be in the prime of his career. However, the move proved to be a disaster.

Henderson was purchased from Chesterfield for £8,000 plus striker Bob Newton. In retrospect, it was a terrible move. Newton has scored twenty times the previous season and at 27 looked to still have plenty left to give. He’d also started the 1983-84 season in some form with four goals in nine games. Nevertheless, by the time Henderson arrived in November, Vale had won just once in the League. Perhaps the Scottish striker could arrest that form.

Erm… no. It was eighteen games before Vale would record another win. To be fair this wasn’t all Henderson’s fault as the club was in a Port Vale sized meltdown. Just look at the issues – four players were on weekly contracts after turning down new deals; the board had blocked transfer attempts by manager John McGrath, Steve Fox was fined after refusing to play in defence, goalkeeper Barry Siddall handed in his notice; Russell Bromage walked out after he failed to earn a long-term contract while McGrath was banned from talking to the media.

So, it was a pretty awful scene at Vale Park but Henderson only made it worse. While Newton followed up his four goals for Vale with a further seventeen for new club Chesterfield, Henderson was a much more sporadic scorer. After a solitary goal in October but failed to score again that year as manager John McGrath was dismissed.

Henderson did enjoy a mini revival in the new year. Managed by McGrath’s replacement John Rudge, Henderson was paired with Eamonn O’Keefe and the pair had hit nine goals by March. However, as Vale slipped inevitably to relegation, Henderson saw his star eclipsed by the arrival of exciting new striking talent Mark Bright.

As Bright began his Vale career in style with ten goals in 31 games, Henderson ended his in shameful fashion. The striker failed to turn up for summer training and the club eventually lost patience and sacked the striker. The end summed up a Vale career which had been surrounded by doom and gloom and had ended in farcical fashion.