Port Vale may have been languishing in the lower leagues for too long now but it hasn’t diminished the passion of the fans who really appreciate the club’s star players.

Relatively unsung Port Vale players like Stephen McPhee, Adam Yates, Dean Glover and Tom Pope are like the high value face cards in online blackjack… winners, every one! Along with these seasoned professionals – then and now – there are few emerging young guns who have the potential to ignite a few sparks of their own.

We take a look at the Valiants who are legends in their own time… and a youngster who is hard at work playing catch-up to the stars:

Intelligent, intuitive and tough in the tackle, Dean Glover played for Vale for nine years.  As an ball-playing defender, he was instrumental in the club’s promotion to the third and later second division in what is considered one of Port Vale’s infrequent purple patches.

Along with pushing the club through the league tiers, the comparatively short Birmingham-born defender was part of the team that lifted the coveted Football League (Autoglass) trophy in 1993.

The mainstay for Vale’s defence was a firm fans favourite who knew exactly when to pass the ball.  Solid in the air and strong in the legs, Dean Glover was low key, reliable and racked up the fifth most league appearances of any Port Vale player. 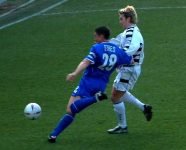 Stephen McPhee scored 39 goals in 130 appearances for the Staffordshire club and used his first experience of first-team football to carve out a professional career for himself.  His 27 goals in the 2003-04 season was the second-best goal tally in more than 65 years, an achievement that earned him the Port Vale Player of the Year award as his goal scoring prowess propelled the club to the seventh spot in League One!

A pacy, hard-working and resilient goal scoring machine, McPhee controversially transferred his talents to Portugal’s top division club, Beira-Mar before moving on to Hull City and Blackpool.  Sadly, a string of catastrophic knee injuries prematurely ended what could have been an outstanding professional career.

The Scouser signed for Port Vale at the age of ten after being scouted in his native Liverpool and he made his first-team debut aged just sixteen years of age in 2001.

He scored his first goal in 2002 becoming the youngest Vale scorer for 24 years and rapidly became a regular in the starting eleven.

A consistent and battling forward, Paynter was never prolific but he still managed 34 goals over six seasons at the club. Such was his impact he was voted the club’s player of the year in 2005. In 2006, Paynter was sold to Championship side Hull City and he went on to enjoy a long career in the Football League making over 500 appearances. 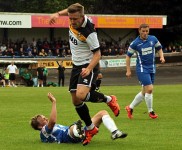 Underrated and solid in defence, Adam Yates was one of Port Vale’s most consistent performers for almost a decade.  Alongside his defensive abilities he also had an unsung and uncanny ability to create goals through his pinpoint precise crossing while the local Staffordshire lad had a strong relationship with his legion of fans.

Yates was one of the players credited with helping Vale climb their way out of League Two in the 2012-13 season.  Aside from his reputation as a dependable right back, Yates was of the few professional players who was always humble and apologetic to fans in defeat.

Yates’ stellar career was curtailed by a horrific accidental collision with Vale goalkeeper Sam Hornby, a collision that left him with severe head injuries. Sadly, Yates was forced to retire from playing but continues to work for the club fostering links with the local community.

A solid and dependable goalscoring midfielder, Cummins was snapped up on a free transfer from Middlesbrough by Brian Horton.

The likeable Irishman was a member of the side which lifted the Football League Trophy in 2001 and he passed 250 appearances for the club before leaving on a free transfer in 2006.

Cummins finally retired in 2014 after 588 appearances but is still involved as a coach.

Who could be next?

He’s had his ups and downs during his Vale career but with over 150 appearances under his belt, Nathan Smith is well on his way to be the current side’s unsung star.

Smith rose to prominence with a stellar loan spell at Torquay United where he lifted both the club’s player of the year and young player of the year awards. His performances propelled him into the Vale first-team in 2016 and he has been a near ever-present since.

Smith had to endure relegation in 2017 but that was tempered by him receiving the player of the year award. He was dropped for the first time last season but bounced back to regain his place and to be named the club’s young player of the year. At just 23 years of age, he has plenty in the tank and will surely get better with experience.