The 2018-19 saw two players join on loan and never make a first-team appearance for the Valiants. It’s happened before and here’s some more details of those luckless players. 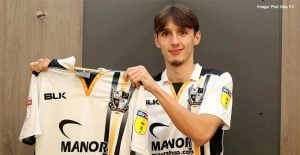 Callum Whelan (right and above)

Young midfielder Callum Whelan was signed from Manchester United where he had been one of three nominees for their young player of the year award. However, Whelan had been signed while Vale were managerless and following the appointment of John Askey, Whelan failed to be even named in a first-team squad. Askey told the media that he needed experienced players to battle the drop and it was no surprise when Whelan was allowed to leave in order to train with Bolton Wanderers.

Like Whelan, signed when the club was managerless, Toby Edser at least made the Vale squad as he sat on the bench against Macclesfield Town. However, he was never called on and like Whelan left without a first-team appearance to his name.

One of two QPR youngsters to join the club, Axel Prohouly proved to be the odd one out. While colleague Olamide Shopido made six appearances, Prohouly failed to even make the squad. Prohouly, signed from Monaco left QPR in January 2019.

Towering defender Reiss Greenidge was six foot six inches tall and was signed at the same time as fellow defender Stephane Zubar and Remie Streete. While the latter became first-teamers, Greenidge never made the grade. he later moved on to the likes of Hemel Hempstead Town where bizarrely he received a call-up for the Guyana national team. 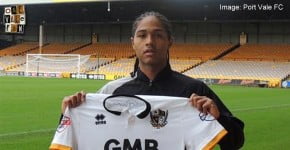 A striker who arrived with some fanfare from Leicester City after a prolific spell in the reserves. However, manager Rob Page didn’t give Harry Panayiotou a single chance in the first-team and he left after a month’s stay. He has recently played for the same Nuneaton side as Vale loanees Mike Calveley and Dior Angus but left to move to Greek football.

Another odd signing, defender Shane O’Connor had played in the Championship for parent club Ipswich Town but on arriving at Vale Park he failed to make the starting eleven at all. He later had a trial with Southend United before moving to Irish football. 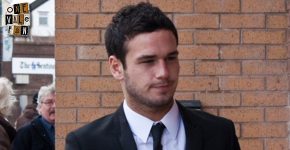 Another player with Championship games to his credit, Lee Molyneux joined on loan in March 2010 but failed to make the first-team. He’s recently being playing for Barrow in the National League.

Hanson was perhaps the unluckiest of our list. He joined the Valiants on a season-long loan in 2008 but a thigh injury meant he was unable to make a single appearance for the club. He’s now manager at non-league Eastwood Town.