Port Vale coach says striker could give club “another option”

Port Vale coach Danny Pugh has said youngster Dan Turner is “a good player” and can offer the club another option when available.

Turner had a frustrating spell with injuries while on loan at Falkirk and has now returned to Vale Park. However, UEFA rules prevent him from playing for the club until the New Year.

Pugh told the media: “As he can’t play, he is in a bit of No Man’s Land for a couple of months which is not great. But he has two months back here, he can get himself fit and look to kick on in January.

“He is a good player. When I have seen him play a few games for the first team he has done well. He can score goals, he is sharp, he is good on the ball so I think in January he could be another option for us. He has got a good future.” 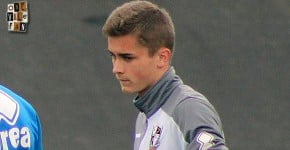 Dan Turner – the story so far…