In our series of features covering 2017 we look at the incident we’ve named as our moment of the year.

Yes, it’s the news that after the misfiring regimes of Bruno Ribeiro and Michael Brown, Vale had appointed playing legend Neil Aspin as manager and paired him with legendary manager John Rudge who had taken up a director of football role.

It was one of very few incidents in recent years where Vale fans were genuinely delighted with the news from the club and enthusiastic about the future. 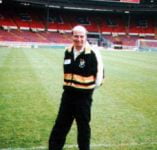