Playing for keeps? Boot, Hornby and Evtimov all in contention for cup game?

Neil Aspin has said that Sam Hornby could join training on Thursday as Vale have multiple goalkeeping options ahead of the FA Cup clash against Oxford.

Hornby is an outsider to take part as he will be lacking match fitness after recovering from injury while the rookie is also on four appearances (and his fifth appearance would disqualify Vale from having any further emergency loans).

I have had a good chat with him last week and have spoken to him this week. So, his confidence is fine and if he plays on Friday then he is in the right frame of mind to play…

Kelle Roos is ruled out through injury while Ryan Boot looks to be in pole position to play. The youngster has only appeared once this season (thus giving Vale more leeway in the emergency loan market) and was left out of the midweek reserves game.

On Wednesday, Aspin told the media: “I think his confidence was affected when he played in goal in the Oldham game and then was left out of the squad. I think his confidence took a blow but I have had a good chat with him last week and have spoken to him this week. So, his confidence is fine and if he plays on Friday then he is in the right frame of mind to play.

“Playing games and playing in training is totally different but we are in a situation where all the goalkeepers at the club have not played a lot of games and anybody you bring in now on an emergency loan will be potentially good, but will not have played league games.”

Evtimov had a torrid debut on Saturday (with the mitigating circumstances that he only joined the squad on Friday afternoon) but he remains another option with Aspin commenting: “He is eligible to play in the FA Cup and we have a situation where we have had Sam Hornby injured. But he is due to train tomorrow for the first time in weeks, so we have a couple of choices for Friday, with Ryan Boot as well.” 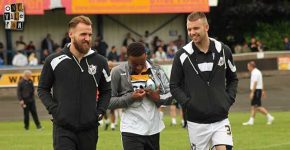 Five of the best Port Vale signings by Neil Aspin