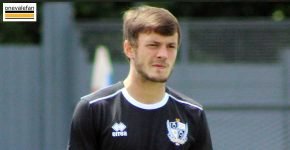 Vale will be without James Gibbons (right) after he was sent-off on his full debut but Tyler Denton will hopefully be fully fit after being forced off after being taken ill. Lawrie Wilson could come into the side to replace Gibbons.

Accrington are hopeful that forward Kayden Jackson can be involved despite being injured during the game with Cheltenham.

“The lads know that tomorrow night is a big game for us. We go into every game as we have done; trying to win…”

One of several managers to be linked with the vacant Vale position, Coleman has many admirers in the game. He is in his second spell with Accrington and despite being just 54 years old he is closing on 1,000 matches in charge as a manager.

The last time we played Accrington at home, the Vale slumped to a shock 2-0 loss. However, Vale had at least won the last three home meetings before then.

Former Vale midfielder Scott Brown, now 32, could face his former club. Brown was a Dean Glover signing in 2009 and he made twelve appearances for the Valiants.