In the picture: very ‘appy back in September

You probably already identified Alex Jones, Remie Streete and Martin Paterson? Well, they were the scorers of the goals when Vale defeated Millwall 3-1 back in September in what was undoubtedly one of the highlights of the ill-fated Bruno Ribeiro reign. Just Streete remains with the club and that Paterson goal proved to be his last in Vale colours. Here are the highlights:

“It will be a tough game, it is always a tough place to go to. We know that it is going to be another battle but we have to look after ourselves, concentrate on ourselves and try and get a positive result…” 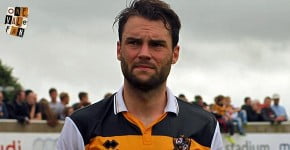 After the impressive performance against Gillingham it would be no surprise if Vale named an unchanged line-up with Kjell Knops (right) keeping his place at left-back. It will be interesting to see if Jerome Thomas has a place in the squad after his controversial Twitter remarks

We’ve already shown the video of Vale’s 3-1 win from earlier in the season. However, away from Vale Park the Valiants record is considerably poorer with the last away win coming back in 1996.

This date marks the anniversary of one of Vale’s best-ever giantkillings. I’m sure you need no invitation to watch the likes of Bogie, Guppy and McCarthy dismantle cup holders Everton once again…

Ian Bogie featured in that Everton win. He joined Millwall for a hefty £145,000 fee in 1991 but rarely justified his fee during a two year spell. In 1995, he was snapped up from cash-strapped Leyton Orient for £50,000 in another of John Rudge’s inspired signings.

Bogie was a huge success at Vale Park – his popularity helped by some high profile goals – notably his famous strike in that game against Everton and a number of goals against bitter rivals Stoke City including that infamous twelve second goal against the Potters. That goal clip is on our YouTube channel and shown above.

Bogie played for five years in Burslem before leaving to join Kidderminster in 2000. He remains a cult hero at Vale Park.