Smith was due to be out of contract in the summer and the news of a long-term deal with the highly rated defender is something of a coup.

Chairman Norman Smurthwaite has said that he is expecting bids for the rising star in the next transfer window while this website has called for the club to give Smith a new deal so the news of the three-year deal is welcome news.

A graduate of the Port Vale youth academy, Smith spent most of the 2014-15 season on loan to Stafford Rangers, making 28 appearances and scoring once. 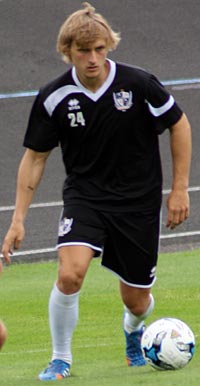 Last season he returned from a season-long loan at Torquay United having made 39 appearances, scoring three goals and having won an unprecedented player of the year AND young player of the year award double. Manager Kevin Nicholson described him as a “freak of nature” and Smith further endeared himself to Torquay supporters by watching the games among fans on the terraces while he was injured.

Smith’s attitude clearly impressed manager Bruno Ribeiro during pre-season training and the manager claimed that the youngster had been the club’s stand-out player in the summer.

The defender started the season in central defence and rapidly became an automatic first choice for Vale. The 20 year-old has helped to keep four clean sheets and has contributed three goals and an assist in his nine appearances this season. His form has seen him nominated for the August League One player of the month and has even earned praise from opposition coaches.

We are delighted to announce that defender Nathan Smith has signed a new deal at Port Vale.

Smith has agreed terms and has signed up for another three years at Vale Park .

The new deal will see his contract run up until June 2020.

Nathan has started every game since the start of the season and has made an impact in League One.

The defender was nominated for Player of the Month for August after being recognised by the EFL for his performances.

Smith has three goals to his name already in the 2016/17 season, including a winner against Rochdale at Vale Park .