Barry has an amusing tale to tell about a painting called “Dreamtime” and encounters in art galleries.

To say Ann and yours love Albany, Western Australia is an understatement to say the least. It was where we spent our very first holiday together some 39 years ago, and a retreat we have returned to many times since.

Just in case I haven’t mentioned it before: Albany was the first European coastal settlement in Western Australia (1826) and is the home of the Anzac dawn service. The region’s traditional land owners are the Noongar people – sometimes called the Kinjarling people (they probably stood on the rocky shores of what is now known as King George Sound and watched as Major Edmond Lockyer anchored the Amity Brig opposite a long sandy beach now known as Frenchman’s Bay.)

Albany is located on the southern coast of Western Australia and is approximately 412 km from our driveway in Kewdale to our motel and takes around 4 hours without comfort stops. But why rush things when you’re on holiday.

As a general rule we set out around 5am so as to avoid the rush hour traffic and make our way down Albany Highway to our first port of call in Williams (156 km from home). We usually pull in at the first of two Roadhouses for a leisurely breakfast before heading off down the track again.

Next stop is Kojonup (254 km from home) where we stop for morning tea in a Patisserie where freshly baked delicious pastries and cakes tempt our taste buds. They are absolutely impossible to resist. Afterwards we stroll around town, buy a post card or two – a newspaper perhaps – then make our way to our car.

Our next port of call is Mount Barker (359 km from home) where a comfort stop is very welcome indeed. After stretching our legs it’s time to make the short journey of 53 km to Albany – usually arriving just before midday.

Because we have been to Albany many times we have just about seen all and everything there is to see so we tend to revisit our favourite places and, of course, relax, relax, relax.

The one thing you can guarantee is that you will always see us browsing art and craft stores and exhibitions, and this brings me to my story.

After a delicious morning tea in town we visited an Aboriginal studio/gallery located near the bottom end of York Street, Albany – just across from St John’s Anglican Church – where we found a veritable feast of local Aboriginal art and craft. The gallery was small and cluttered and barely had enough room to walk around. Ann browsed away, but from the very moment we walked through the door my eyes were drawn to one particular painting and I was mesmerised.

After what seemed an age Ann came and stood next to me, but it was the voice of another lady that attracted my attention – the Gallery Curator. When asking if she could be of assistance I asked if she could tell us the ‘Dreamtime meaning of the turtles in the painting.

The lady explained the turtle wisdom teaches us about walking our path in peace and sticking to it with determination and serenity. Further, those who have the turtle spirit will take time-out from their busy lives to reflect and reassess life’s short, medium and long-term solutions, plus maintain emotional strength and an understanding for all others.

The only reason I can remember the above is because it is written down on the card we were given when making our purchase.

It would be several days later when we were attracted to a local art exhibition in the Albany Town Hall – top end of York Street – where a collection of contemporary work was on display. With the exception of a few abstract paintings the majority were Albany landmarks.

The notice said we were welcome to browse or take the guided tour. We chose the latter and joined a small group gathered around the Curator.

So there we were, following and listening to the Curator giving short commentaries on the many exhibits. Time drifted by, and although it wasn’t lunch time my thoughts were of a snack – courtesy of one of the many eateries in York Street – when I was jolted back to the moment by our guide waxing lyrical about one of the abstract paintings.

Waving his arms and stepping from one foot to the other he was excitingly inviting us to absorb its rich colours, and to be drawn into its story. Story! What story!? To me it was as if someone had stood back from the canvas and flicked and scraped paint over it. No, for me there was no story. The ‘Turtle Spirit painting, on the other hand, is not only a story, but an ancient, sacred and beautiful communication from Australia’s Aboriginal ‘Dreamtime.

I was wondering if the, err, painting belonged to the Curator when Ann suddenly cried out ‘CRAP’ In the silence that followed all eyes were on my lovely wife – well everybody’s eyes except yours truly. I was trying my utmost not to laugh.

After gathering his composure a very red faced and seemingly upset Curator asked Ann why she didn’t like the painting to which she replied something along the lines that he was trying to convince us to make sense out of nonsense.

The ‘tour’ done and dusted Ann and yours truly wandered into a nearby eatery for a spot of lunch.

p.s. Just in case you would like to take in your own tour of Albany, Western Australia here’s a link: http://www.rainbowcoast.com.au/areas/albany/albanycity.htm

And here’s the Aboriginal painting in close-up… 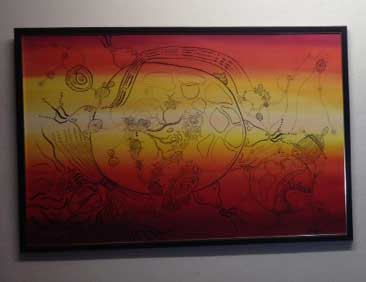