A viewpoint with a difference as Scott of the Tangerine Knights explains the huge problems League One newcomers Blackpool have encountered. 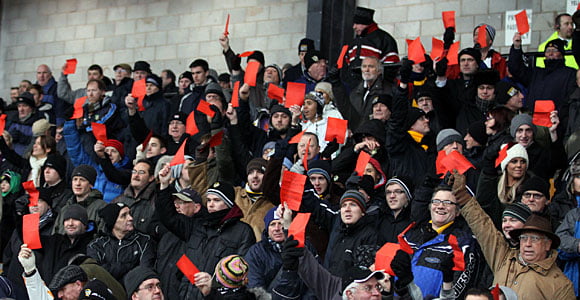 Before we begin, we’d like to add that here at OVF we hope that Blackpool’s owners will listen to their supporters’ concerns. OVF backed Black and Gold (Port Vale’s action group to remove the the board) when it tried to oust Vale’s previous owners. We understand the reasons why clubs need change in the boardroom and would remind the Oystons that without fans a football club has no heart.

Obviously, the Blackpool owner’s well-publicised attitude towards comments online prevents us from saying too much other than we hope that Blackpool do get the owners they deserve and as part of a wider football family we wish fellow fans (of any club) all the best to secure the best possible future for their team.

We also hope that as in some small way this article also educates the Port Vale fanbase about what has been happening at Blackpool in recent years.

I’m banned for comments made on social media… like hundreds of others. We only retained five players anyway so it’s difficult to give an opinion.

Highlight(s) of last season on the pitch?

The abandonment of the Huddersfield Town match. Most of our fans would agree with this.

Worst moment(s) of the season on the pitch?

Getting beaten 7-2 at home to Bournemouth.

Sum up the season in a sentence or two?

The season was a disaster and we are now at civil war with our owners. Thousands wanted us to be relegated in the hope it rids us of the Oystons.

Your view on off-field affairs this season?

The following is the sole opinion of Scott from the Tangerine Knights and not necessarily the viewpoint of onevalefan.co.uk:

Wow, where do I start? Well for a start, a lot of us no longer call it Blackpool FC, we call it Oyston FC or the ‘company’.

We played a season with more than fifty players, these mainly consisted of loans and three-month deals…

We appointed Jose Riga and ‘the company’ sold two-year season tickets for £195.30 on the back of the ‘Riga revolution’. There was then a stand-off between Karl Oyston (the chairman) and Jose Riga about what players were to come to ‘the company’. This dragged on all summer and it seemed neither would back down. We started the season with next to no pre-season. Friendlies and a tour of Portugal were cancelled due to having no players. We played a season with more than fifty players, these mainly consisted of loans and three-month deals.

Remember we had £100m in the bank from our season in the Premier League. Then we had the owners suing forums and fans for £150,000 and there are more on their way apparently. One fan, Frank Knight (an OAP) was sued for £20,000. His family were devastated so we raised the amount needed for Frank in a weekend. Donations came from football fans all over Europe.

I started the Tangerine Knights three years ago. The Knights are a protest/action group who organised trips to Karl Oyston’s house (twice) as well as ‘Judgement Day’. The latter had 2,000 plus fans protesting outside the stadium on the last game of the season.

Two seasons ago we had an average of 14,000 and now there’s around 4,000 going in. We predict this will be even less next season. Fans that have been to Plymouth on a Tuesday night etc. now refuse to go into Bloomfield Road until they sell up and leave. NAPM (not a penny more) has been adopted by a large percentage of fans. Many that still have their free two year season ticket don’t buy anything in the ground or from ‘the company’.

All-out civil war is the only way I can describe what’s happened to the old girl to be honest. I’m really busy given what’s happened with the FA this week and their pathetic decision regarding the textgate scandal (OVF Note: their punishment handed out to Karl Oyston for abusive text messages).

What are your expectations for next season?

Ideally the Oystons sell ‘the company’ to Valerie Belokon who is a Latvian shareholder. Realistically if that doesn’t happen we’ll be relegated again.

Where do the club need to strengthen on the pitch?

All over, we only have eight players at the time of writing this.

If you could take one Port Vale player for next season who would it be?

What do the club need to do off-field to improve?

The majority shareholders need to sell up and leave town.

Blackpool fans: We’re improving a little, but not enough