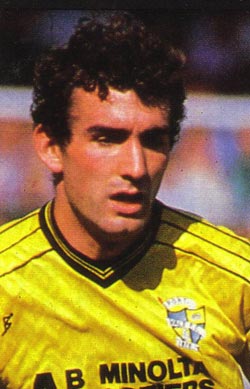 The 1988-89 campaign will be fondly remembered by the Vale fans who witnessed it. Rudge’s team was a brilliant mixtures of characters that worked. In midfield, the energetic Robbie Earle complimented the elegant Ray Walker while the veteran Ron Futcher brought the best out of talented strike partner Darren Beckford.

But despite the side’s undoubted talent, there was a gaping hole in the starting eleven. In the summer, Paul Atkinson (left), a talented left-footer from Sunderland, had been recruited and indeed had scored twice on his debut. But that was to be his most memorable contribution by Atkinson as he soon succumbed to serious injury.

David Riley, a striker, was moved to the left to cover Atkinson’s loss but he wasn’t really a left-winger. So, just weeks into the season, in August 1988, Rudge was on the look for a left-footed replacement – and on the radar was 19 year-old Staunton.

The Irishman had began his career at Dundalk but Liverpool had snapped him up when he was 17. He had yet to make a first-team appearance for the Anfield club. Staunton had spent a spell on loan at Bradford City to gain experience and perhaps it was with that in mind, that Rudge approached Liverpool about loaning the player.

Unfortunately, the request was rejected and once the player forced his way into the Liverpool first-team weeks later, Vale’s hopes were dashed. It took the Valiants months to replace Atkinson but by coincidence the eventual replacement also arrived from the Anfield ranks. Rudge signed John Jeffers (pictured), initially on loan, before the move was made permanent.

But had circumstances been different, perhaps it could have been his teammate Staunton who’d have been wearing a Vale shirt instead.