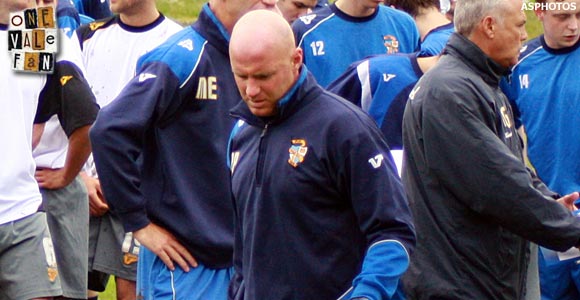 The most significant change for the Valiants will see Rob Page (above) step in for Micky Adams as Vale manager. Adams is recovering after hip surgery but Pages, who had been linked to jobs with AFC Wimbledon and Sheffield United will be eager to prove himself an able deputy.

Page’s first task will be to determine whether Dan Jones is fit enough to return to the side. The probability is that the game is too soon for the popular left-back so Vale’s back four should remain unchanged.

Elsewhere, Ben Williamson did his chances of a start no harm with a “super sub” display against Coventry.

Opponents Tranmere are trying to add a loan signing to cover Evan Horwood’s injury. If they are unsuccessful, Danny Holmes will cover. Midfielders Andy Robinson and Jason Koumas will be missing through injury.

“This is an honour for me and I want the fans to know that.”
– Rob Page

“There are no easy games in this league so we know every game is going to be tricky and a tough test. We’ve got to be sharp, we’ve been working hard this week and hopefully we can take that into Saturday. They’re a hard team to place against, two banks of four. They’ll be hard to break down.”
– Doug Loft

“We were straight into Stoke on Wednesday night and we’ve got to take that into the Port Vale game, get into their faces and try to get all three points.”
– Ashley Taylor

Last meeting:
The two sides last met in September 2012 for a Johnstone’s Paint Trophy tie. It was Vale who ran out winners thanks to two Jennison Myrie-Williams’ goals (above).

beat Tranmere away in the league was back in October 2006 when goals from Jeff Smith and Leon Constantine earned Vale a 2-1 win. 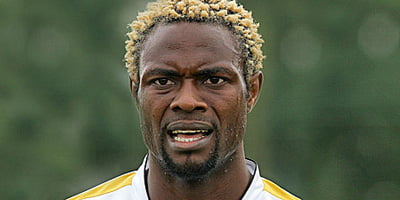 Tranmere boast two former Valiants in their ranks. Popular striker Akpo Sodje (above) joined Rovers in the summer but could miss the game through injury. Abdulai Bell-Baggie spent a brief spell on loan with Vale in 2010 and after dropping into non-league football, he joined Rovers in 2012.

Meanwhile, Vale also boast two former players from the opposition. Jennison Myrie-Williams spent a spell on loan with Tranmere from 2007 to 2008 while Chris Shuker made over 100 appearances for Rovers.

Appeared for both clubs

Like several other clubs, Tranmere Rovers started life in the summer of 1882 as Belmont Cricket Club which was connected to the Wesley Church in Higher Tranmere. In 1912, the club changed its name to Tranmere Rovers. Prenton Park is the club’s third ground.

Some lions, a star and a tree…

The current club crest (right) was adopted in 1997 and is a simplified version of the Birkenhead borough crest. Amongst the symbols are a lion from the arms of the family of Massey, founders of the Benedictine Monastery in 1150, a tree which symbolises Birkenhead Park, a star which symbolises Bebington and the two lions alluding to Oxton.