Wednesday 20th February 2013 is the 59th anniversary of one of Vale Park’s finest games of all time. Freddie Steele’s Iron Curtain side stunned FA Cup holders Blackpool (boasting Stanley Matthews and six other internationals) in a famous FA Cup giantkilling.

Late on, Ken Griffiths hit the post for Vale, while Basil Hayward was fouled in the box only for no penalty to be given. 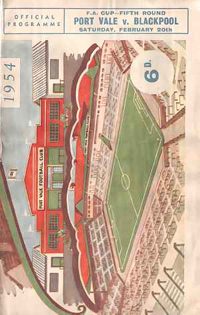 The national press praised “Vale’s hard-working display” and called it a “triumph of teamwork.” The Iron Curtain team went on to reach the FA Cup semi final that year and a record breaking promotion.

More OVF features on the Iron Curtain side:

Please share this on:
Managerless Torquay prepare to take on Vale McCombe ready for action?

Masters of Art and Sport