OVF editor Rob Fielding chats to former Port Vale striker and cult hero Bob Newton about his time at the club in the early eighties.

I first got in touch with Bob Newton a few weeks ago when the former striker asked for my help in contacting his former Vale colleague Steve Fox, who has been tragically struck down with cancer.

While I passed on Steve’s contact details to Bob, I asked him if he would mind answered a few of my questions. I was slightly worried given Bob’s fearsome onfield reputation but I shouldn’t have been concerned. Bob was helpful, accommodating and funny. “I’m happy in life” Bob told me and interviewing the 55 year-old was certainly a pleasure.

Even though he was in the middle of a house move – “My next-door neighbour is Danny Wilson,” Bob points out – the former Vale centre-forward still found time to reply to my questions.

Naturally, my first question concerned how and why Bob decided to join the Valiants. The striker gave me a candid response: “I was actually going to the New England Tea Man but a few clubs were interested. There was Portsmouth Scunthorpe, Millwall and of course, Vale.” 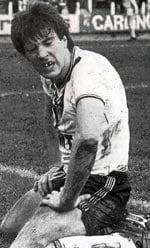 So why did Newton pick the Valiants? “I’d played against Vale and knew a few of the players which was definitely a factor in me signing. I knew they had some superb players such as Sproey , Russell Bromage, Geoff Hunter and Colin Tartt and after meeting John McGrath, he sold me the club to me,” Newton tells me.

Bob takes time to praise the coaching staff adding: “John was a influence on all the players, but so was Rudgie . After my wife and I met them there was only one place I was going. I’d loved Vale Park as a away player as I found the fans were very good to any away players they thought were giving their all.”

Were there any other reasons in addition to the playing talent and the coaching staff, I wondered? Bob adds “Well, being honest, I got a good deal.”

Bob soon struck up a rapport with the Vale fans on the terrace and I wanted to ask him about that relationship.

It lifted my game, I loved playing my heart out for them and think that they did appreciate it…

“Yes, you know, it was great,” he says, “it lifted my game, I loved playing my heart out for them and think that they did appreciate it, I know I appreciated them and I still feel proud saying ‘I played for Vale.'”

And what are Newton’s memories of that marvellous 1982-1983 promotion season? “As a professional footballer, life doesn’t get much better,” he adds. “We had lots of great times. I’m a very lucky guy.”

I wonder what the dressing room was like in the early 80’s and Newton is happy to oblige. “There were some great characters around at that time such as Barry Siddall, Sproey, Brom, Geoff Hunter, young Robbie Earle and of course myself, we were always taking the Mickey.”

One incident stands out for the former striker: “I remember we were about to play Manchester United and we were having a light training session. I decided to play a prank on Lol the physio by feigning an injury. I went down in a five-a-side and Lol came running on. I cried out ‘I’ve got Yale knee!’ Lol looked perplexed, he had no idea what I meant. ‘He’s got Yale knee’ he shouted out to McGrath. ‘What the f*** is Yale knee?’ the manager asked. ‘It’s locked on me,” I sniggered. ‘Well, get a key and unlock it’ McGrath boomed to Lol. All the players were in stitches but Lol still hadn’t cottoned on to the joke. He was a wonderful man.”

Were there any tensions? “Well, I used to travel in with Mossy , Tartty and Ridley from Chesterfield each day. We had some right laughs as Mossy and Tartty didn’t get on and I used to stir it up between them,” Newton grins.

Newton’s stay at Vale Park didn’t last that long and he departed in his second season with the club. How did that come about? “I didn’t want to leave, but in football at that time players had no choice, there was no falling out or anything it was just how it was. I left for my hometown club and Vale had that young promising striker Mark Bright to replace me. What a top lad and gentleman! I loved Brighty and Robbie Earle. I made Robbie’s first league goal at Aldershot. I could have scored but chose to chip it to him for a easy header. I like to think that helped him on his way, as for all the lads they were superb guys and it was a privilege to play alongside them.”

And does Bob have any message for the Vale fans reading this? “Thanks for the memories, the support you gave the team and myself and for voting me as the fans’ player of the year, which was a great honour. I will never forget my time at the Vale, it will always be in my heart. I love you all and thanks for the memories,” Bob comments.

OVF would like to thank Bob Newton for taking the time to answer our questions and we’ll be making a donation to a charity of his choice as a thank you.