Long-serving Port Vale kitman Stan “Stan the man” Nicholls has passed some more of his anecdotes onto OVF. In his latest anecdotes, Stan recalls the Vale players’ instant respect for John Rudge, an unfortunate car journey and a kick around with a famous fan… 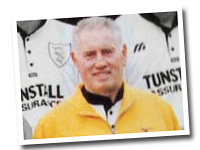 I would like to tell you about the trips to Italy in the Anglo-Italian cup competition.

Well, we were having our last training session on Thursday, the day before we were scheduled to fly to Italy. Rudgie was working with Mussie , throwing the ball at different angles, you know the sort of thing, and Mussie had to stop the ball. Suddenly, Rudgie let out a right yelp. He had done his ankle and the doctor took a look and said he’d have to have to set it set in plaster.

We were all set to go to Italy the next day, so I had to take Rudgie to the plane in a wheelchair and make sure all the kit was correctly onboard as well.

Well, by the time Rudgie and I got onboard the players were on the plane and were all sitting in the wrong seats! Rudgie hobbled on board and simply pointed at the seats with the longest leg room. The players just shot off and Rudgie didn’t even have to say a word.

Rudgie really was the King of Vale Park at the time.

When we came back from the match in Italy, which we won by the way, Rudgie still had to take the training sessions which were at Milton at this time. He couldn’t drive with his leg in plaster and he asked me if I would run him over in my car.

Now, my car was for from new, it had a catalytic converter fitted and if I had to brake a bit sharply it use to send out a horrible smell. I was taking Rudgie to training this morning when I had to break suddenly and the stink was vile, Rudgie kept looking at me and he said “Do you feel a little bit better after that?” I tried to tell him what it was, but he simply replied “That’s a new name for it, then.”

A KICK ABOUT WITH ROBBIE

I’d just like to say how lucky I’ve been with all the famous people I have met on my time at the Vale.  I have met most top managers the like of Alex Ferguson, Alan Ball and Steve Bruce, just to name a few.

I have also kitted out Robbie Williams and Jonathan Wilkes for testimonials. I even had a bit of a kick about with Robbie to loosen him up after he got back from America to play a testimonial game.

These are the personal recollections of Stan Nicholls.

Kitman confessions: Getting my own back on prankster Swanny