To celebrate, OVF have taken a look inside the OVF Vaults and reproduced this exclusive 2011 interview with the great man.

In 2011, Rob Fielding managed to catch up with Valiants legend Martin Foyle to reminisce over his Vale playing and managerial career.

Naturally, Rob’s questioning started with a look-back at that never-to-be-forgotten 3-1 FA Cup replay win over Stoke City, in which Foyle scored twice.

“I’m getting old now,” Foyle confessed, “so, it’s difficult to remember every great moment at Vale. But that was definitely a major one. I’d been out injured and Rudgey took a chance on me.”

The striker, second in Vale’s all-time scoring charts didn’t let his manager down.

“It was great to see a full house and play in the derby atmosphere.

“I was really pleased to score in front of the Stoke fans but funnily enough the memory that most sticks out was seeing Swanny and Mussy laughing when Dave Regis’ shot stuck in the mud.”

“We had a fair bit of competition with Stoke that season,” Foyle added. “We played them five times in total and I’m delighted to say I’ve never lost to Stoke in my career – not at Vale nor with Southampton or Aldershot either.”

So, how big an influence was manager John Rudge on Foyley?

“A big influence,” Foyle replies without hesitation. “John was a calming influence and his scouting was very good. He was open, honest and very straightforward.”

Foyle also has praise for the other Vale manager to take charge during his spell. 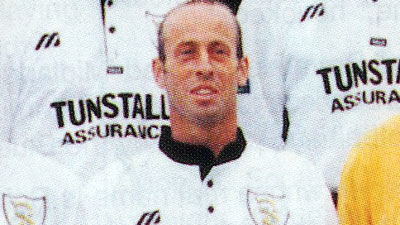 Martin Foyle is the club’s highest post-war goalscorer with 107 goals. He lies in second place in the club’s all-time scoring charts behind Wilf Kirkham.

Foyle cost a then club record £375,000 from Oxford Utd in 1991 and played for the Vale for nine years. He was top scorer on four occasions and voted player of the year in 1995.

“Brian Horton was also great. I really appreciated him giving me a chance of coaching. I really thought it would not be my thing, but I’ve found it addictive and I’ve got him to thank for giving me my chance.”

So, does Foyle still look out for Vale’s results?

“It’s the first result I look out for,” he replies. “I have Vale in my heart and I always wish them the best. I am always in touch with Grewy and Micky Adams invited me in for training too. I have great Vale memories and I want Vale to go up.”

We asked the Vale legend if he had any message for Vale fans. His reply was straight to the point: “Get behind the team and thanks for your support over the years.”

With that, this brief interview was at an end, but there was still time for Rob to express how much he enjoyed Foyle’s contribution on the pitch and in the dugout. “It was a pleasure,” Foyle replied. “I’ve enjoyed it and I’m really pleased to have talked about some good times.”

Many thanks to Martin Foyle for taking the time to speak to us. Martin received no payment for this interview but as a thank you, OVF have made a donation to a charity of Martin’s choice.