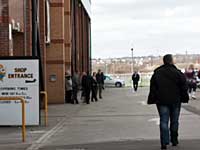 The Sentinel newspaper reports that the discredited Port Vale FC board have failed to make January’s scheduled payment on the club’s £2.5m loan from Stoke-on-Trent city council.

The club missed a deadline of January 31st to make the payment of just under £20,000, while December’s payment was met on the 30th January, almost a month late.

This is not the first time the Vale Park regime have broken the terms of the loan agreement. In December, the club’s former chairman, Peter Miller, took out a £277,000 mortgage against Vale Park. Then the board failed to submit last season’s audited accounts to the council by a set deadline of December 27.

The inability to pay the council will reinforce claims that the club has no money and is on the brink of administration. If the club does admit financial failure, the blame will lie firmly at the feet of the Port Vale board, despite their recent desperate attempts to blame protesting supporters for the club’s woes.

The Port Vale Supporters club is leading the call for a change of regime and has requested an EGM. The club is set to respond to that request in the coming days. Meanwhile, a group of shareholders have visited the club this week and (under their rights as shareholders) they viewed a number of club documents. However, the documents they viewed have not been disclosed for legal reasons.

Sarah Hill, the council’s cabinet member for finance, told the Sentinel: “If I was a Port Vale fan then I would be worried about this and from the council’s point of view we want our money back and to be paid regularly.

“This is a serious matter because we’re talking about taxpayers’ money, but we want to give the club the time and space they need to give themselves a business base from which to move forward.

“The last thing we want to do is push them over the edge.

“If we called in the loan we would be unlikely to get the money back anyway.

“We haven’t set the club a deadline to pay back January’s repayment, but that could be one of our options. It depends what happens.”