On the 18th March ovf received a postcard from Kirsty to share with us her fantastic weekend in Torquay. 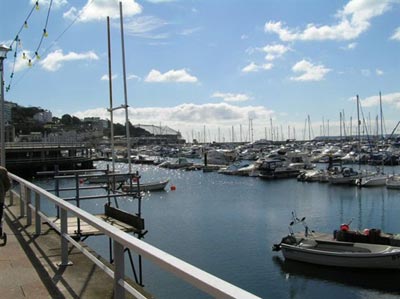 We’d plotted and we’d planned a weekend by the ‘Bay
In continental Torquay when Port Vale played away,
And the list of Valiant names in our little caravan
Meet on Fielding’s message board we know as onevalefan.There was Aney, Tosh and Val and Uncle Bede and me,
Plus Tracy and her oatcakes that travelled to the ‘Quay,
We turned into an alley when looking for our digs,
But it narrowed to the point that it seemed to squeeze our ribs.

So Aney stopped the car and uttered a small curse
Then after several seconds put the car into reverse,
But thankfully no damage to the car or weekend done –
Which would have been much better had the ‘Vale stepped out and won.

Our home away from home, a cracking little place,
Was dead clean to a tee with breakfast really ace,
But the walls were paper thin that when others were in bed
Our lives were entertained with the stuff they did and said.

And also at our digs were the Wainwright’s’ Phil and Caz
To help us truly celebrate with loads of razzmatazz,
So our caravan of eight knew exactly what to do,
We set off to a hostelry to grab a drink or two.

Friday night in Torquay was like Boslem Satdee night
With Valiants everywhere in colours black and white,
No matter where we went we called out and we cheered
To all and everyone – for me that seemed dead weird.

A game of ladies football to pass the time away,
And with that plastic bottle we showed ‘em how to play,
When Val put in a cracking cross for me to take a shot
‘Twas ‘Foyley, sign them up, they’re the best that we have got’.

Our arrival in Torquay had been met with hail and snow,
But we were on a high so onwards we did go,
With the oatcakes now long gone snappin’ was our need,
But not of fish and chips, for us a curry feed.

At the top of Abbey Road we found an eatery
Where chillies, herbs and ginger are sprinkled liberally
In your soup and on your vegies, and in your vindaloo
To leave your mouth and throat on fire, plus your intestine too.

Now caz is one for dancing, for kicking up a storm,
And a shindig’s always on if she is on her form,
But she gave a big surprise when she stepped onto the floor
Of the Balti Garden restaurant in Torquay by North Shore.

She skipped the light fantastic, the waiters were impressed,
And as Tina Turner has it ‘She simply is the Best’,
She was spicy, hot and seamy so we ladies all joined in,
As did one of their waiters to share our fun and din.

The night was done and dusted so we made our way to bed
To hear each couple doing, to listen what was said,
Before we knew the sun was up, the snow had gone away
And we just knew that we would have another super day.

It was just before the game when Bede said ‘Right you lot,
I’m off to have my eyebrow pierced, I truly kid you not’,
But then came back and lamely said ‘That mob’s not up to scratch,
In any case there is queue and I would miss the match’.

Then just before the game it was truly nice to spy
Cannon, Sage and Wick Boy, plus Johnnie and Belfry,
Then at the game we saw Pault without ‘his other half’
Plus others from onevalefan who’d made the journey ‘sarf.

A dire game and a last gasp goal gave Torquay all three points,
So to a local pub we went to warm our aching joints,
But the hostelry was small and full of barking dogs
Whilst their little owners drank and emptied out their clogs.

And what about that little bloke, his belly full of booze,
Who shaped up to a bunch of men who wore far bigger shoes,
He waved his arms and fell about – it was the daftest sight,
But all our pints and quarts were safe because there was no fight.

Then later on he left the bar and staggered to the street
And started climbing ladders which ended in defeat,
His feeble frame could hardly stand against the evening breeze
That we were quite convinced he would fall should someone sneeze.

The weekend’s gone and we are home with memories to share
And already we are planning to go to Tranmere Fair,
But just before I go my friends a last word if I may
‘There’s nothing to compare with a Valiant trip away’.