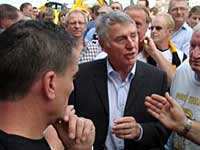 On a day of ignominy and gloom for many Port Vale supporters, the overly casual reaction of interim chairman Mike Lloyd to the crisis has prompted furious criticism from Port Vale fans.

Earlier on Saturday it was announced that the club had been issued with a transfer embargo for what was later disclosed as late payments to HM Revenues and Customs.

Following such a dramatic move, many fans would have thought it was the Chairman’s duty to issue immediate reassurance and guidance to both fans and shareholders and clarify the matter with the media.

However, Lloyd’s response was not one befitting a person in a role of responsibility. Firstly, Lloyd refused an interview with the BBC team covering the game for BBC Radio Stoke. Then to compound matters, Lloyd sent a what can only be described as glib text message to the presenter of Radio Stoke’s post-match “Praise and Grumble” programme. In the text Lloyd completely failed to acknowledge his own board’s responsibility for the club’s financial woes and instead tried to blame the issues variously on short-term cash flow, protesting fans (blaming his own customers, in other words) and increased overheads as a result of the protests.

Many fans would think that such a response is utterly unbefitting of the chairman of a limited company and that Lloyd has come in for heavy criticism from fans. One long-standing Port Vale supporter Jean Jackson posted an open letter on the OVF forum stating – “I was astonished to hear your response to the Radio Stoke reporter as I was driving home from Northampton and even more astonished that your idea of communicating with the supporters of this football club was to knock up a quick text to the station afterwards.”

Jackson adds: “Now you find you can’t pay the bills and instead of accepting responsibility for the ludicrous mismanagement of the club’s finances, you seek to alienate further those very people upon whom you depend to improve your income streams by blaming them for the current mess.”

Her comments have received a unanimous positive reaction from Port Vale fans with many of them calling on Lloyd to resign with immediate effect.