Van der Laan: I had my best time at Vale Park

As one of Port Vale’s finest continental imports, we felt it was high time OVF caught up with mercurial midfielder Robin van der Laan.

The former midfielder is now coaching at his own soccer school in Canada and we were able to call Robin to discuss his time at Vale Park.

“ I had my best time in football at Vale Park. I had lots of fun, it was a proper team with the usual fighters, but a good mix. Most of all, the team spirit was fantastic

Our first question concerned his thoughts on arriving at Vale Park in 1991. Robin explained more: “My manager knew John Rudge very well and I had a month on extended trial, really. I really liked the area, the club and the players and I was serving a suspension in Holland at the time, so it was a good move for me.”

Van der Laan started life as a striker at Vale Park adding with pride “I scored four goals in eight games” but was soon converted with great success to midfield. “I liked to be involved and I was known as a box-to-box player . When Robbie Earle moved on, I was moved into midfield and I really enjoyed it.”

The Dutchman was soon making headlines in his new role including a strike at Anfield in Vale’s creditable 2-2 league cup draw with Liverpool in October 1991. Robin felt this match was a “highlight” of his career and revealed that he had “dreamt of scoring at Anfield” the night before and had “butterflies in his stomach” before the game. He also felt that Vale “deserved more” in the replay which Liverpool won 4-1. 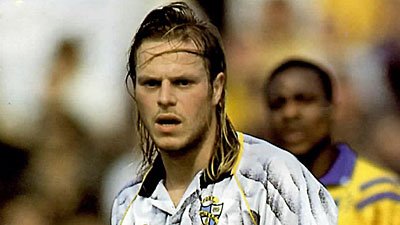 So, while we’re on the subject of memorable matches, we wanted to hear van der Laan’s views on that Autoglass final match at Wembley. He told us: “Yeah, that was unbelievable. That season we were supported so well and to take so many to Wembley was amazing. It’s a definite highlight but my only regret is that I’d swap that win for a win in the play-off final the next week.”

Both those games were under legendary manager John Rudge and we were keen to find out van der Laan’s views on the great man. Robin commented: “He was obviously really good at spotting a player. I remember reading a quote that ‘everyone dreaded a phone call from John Rudge as he always trying to find a bargain” . He was a great manager and very hard working.”

“I had my best time in football at Vale Park. I had lots of fun, it was a proper team with the usual fighters, but a good mix. Most of all, the team spirit was fantastic.”

We’d only got time for a few more questions to ask the former Vale midfielder, so we wanted to find out whether he still kept an eye out for Vale’s results. “Oh yes, the first thing I do is look for Port Vale and Derby County results at the weekend. ”

So, would he love to come back to Vale Park and take in a game? “Definitely. I’d love to come back. In fact, I may be over in the Potteries next year as my soccer school could be linking up with Port Vale. I’ve spoken to Mark Grew and Bill Lodey about a possible link-up.”

Our final question was to ask Robin if he had any message to Vale fans. He responded: “Yes, thanks for your brilliant support when I was a player and I really do hope better times come to Port Vale FC.”

As a thank you for Robin van der Laan’s time, OVF has made a small donation to charity for taking part in this interview