We take a look at the club’s most famous supporter – world famous pop star Robbie Williams – and his connection to the Valiants.

Since branching out into solo stardom, Robbie has remained true to his Valiant roots…

Robbie Williams, Port Vale’s most famous supporter was born above a pub, a mere two minutes walk from the Vale Park pitch.

The entertainer has proclaimed his support for the club since his Take That! days and at the height of Take That’s fame, Robbie wearing a Vale shirt on tour would guarantee an extra £1,000 weekly takings at the club shop.

Since branching out into solo stardom, Robbie has remained true to his Valiant roots. On an episode of Channel Four’s “TFI Friday” he revealed his “Port Vale” guitar case and slammed Chris Evans’ ill-judged remarks that he was a Man Utd fan with “No! I’m a Vale fan.”

A BBC documentary showed Robbie walking the Vale pitch interspersed with pictures of his first game for Vale. That appearance saw Robbie playing in a testimonial amongst his Vale heroes to mark the long-standing Dean Glover’s 10 years at Vale. Typically, Robbie stole the show by scoring a penalty and then being “sent off” for over-celebrating!

Robbie has undoubtedly brought Port Vale to many people’s attentions and it is surely to his credit that he has stayed true to his boyhood team rather than joining the trendy ranks of celebrity Premiership supporters.

Robbie appeared again at Vale Park in testimonials for Martin Foyle and Neil Aspin – stealing the show both times.

He may now be known acrosss the globe, but Robbie still hasn’t forgotten his roots. 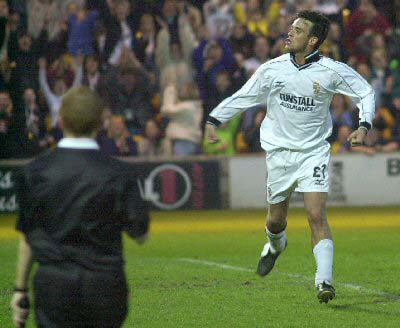