From the first recorded match back in 1882 to the most recent, a 1-0 victory for Vale in 2001, the onevalefan editorial team takes a look back at some of the most memorable Potteries Derby matches.

It took seventeen attempts before the Valiants broke their derby duck against their local rivals, but this match was well worth the wait. A crowd of over 7,000 at Cobridge’s Athletic Ground saw the Valiants secure a friendly win thanks to two goals from striker Ditchfield. In Football League encounters, Vale’s win came much sooner with Vale winning the team’s third league fixture – a 2-1 win at the Old Recreation Ground in 1920.

The first league derby for 32 years prompted Stoke’s largest crowd for seven years as 27,000 crammed into the Victoria Ground. Darren Beckford had a goal disallowed for offside, before captain Robbie Earle gave the Valiants a dream start with a fifteenth minute opener. Vale kept the lead until the 65th minute when Bamber set up Palin for the equaliser.

After that lengthy wait for a competitive fixture, Vale’s rise to equal status with their neighbours saw Valiant supporters treated to a further eighteen games in the next twelve years.

The Valiants secured a memorable victory in front of the Sky TV cameras in an FA Cup 1st round replay at Vale Park. The first match had finished goalless thanks mainly to keeper Musselwhite, but Vale were to make no mistake in the replay.

The match was played in atrocious conditions and Foley demonstrated Stoke’s battling credentials with an awful high tackle on Aspin which forced the Vale defensive lynchpin out of the game. Things got worse as Stoke took the lead against the run of play through Sandford. However, Vale roared back to equalise within a minute thanks to good work by Cross and an accurate finish by Foyle.

Things got even better for Vale on the stroke of half-time as more excellent work by Cross set up Porter who crashed in a shot from outside the box. In the second-half Swan had an effort ruled out for offside, Jeffers hit the post, while Stoke’s Regis squandered a golden chance to equalise as his shot stuck in the Burslem mud.

But with moments remaining, Vale made victory safe as Cross played in Foyle who finished expertly past Sinclair to take Vale into the second round. 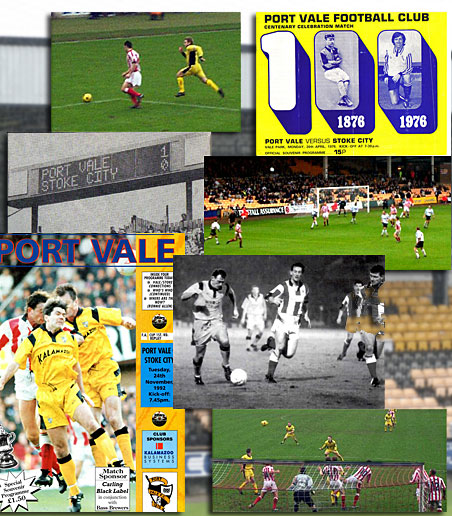 A selection of Potteries Derby images from the OVF Pictures vaults

Ian Bogie became the toast of Vale Park after a famous early strike for the Valiants. Bogie had already given Vale a win in the first fixture of the season as Vale won 1-0 at the Victoria Ground. In the return fixture it took him just twelve seconds to make his mark.

Straight from the kick-off Vale pressed through Andy Hill and Bogie ran onto his through ball to strike the ball past Prudhoe and delight the majority of the crowd of 16,000. It sealed Vale’s first league double over their neighbours since 1925.

Bad weather had caused several delays of an eagerly anticipated LDV Vans tie at Vale Park. The Vale’s fixture backlog became so desperate that Chairman Bill Bell opted to give up home advantage and play the tie at the Britannia Stadium.

The match finished 1-1 after normal time with Cummins’ strike being cancelled out by Mohan’s late equaliser. But Marc Bridge-Wilkinson became the toast of Vale fans everywhere with the first-ever Potteries derby golden goal. His 105th minute penalty ensured Vale’s progress into the latter rounds of a tournament they would eventually win.

The Valiants ended the latest bout of Potteries Derby on a high after a victory at the Britannia Stadium. Midfielder Micky Cummins scored the winner for the Vale on 36 minutes. 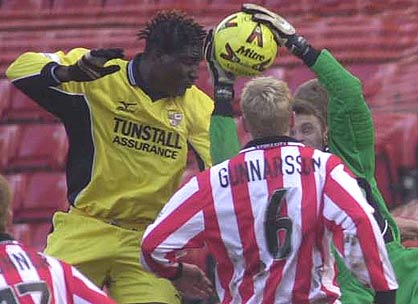