Goodlad: I haven’t looked back

Port Vale goalkeeper Mark Goodlad talks about how he leapt at the chance to play for the Valiants.

When did you first decide to become a goalkeeper?

I’ve always been a keeper. From the age of eleven to sixteen I kept goal for Barnsley schoolboys and I also went to the centre of excellence in Rotherham for a while.

Was it an easy decision to move to Port Vale?

Coming to Port Vale from Forest could have been seen as a step down but my chances were limited and Brian Horton promised me a chance. Since I got that opportunity I haven’t looked back.

After the departures of Pilkington and Musselwhite you found yourself the new Vale number 1 – was it a daunting occasion or did you relish the chance of getting regular first team football?

It’s a massive boost to your confidence when you’re handed the number 1 jersey and I quickly went from being a small fish in a big pond to a rapidly growing fish in a much smaller pond. Two seasons and over eighty games later I’m looking forward to reaching the ton before too long. 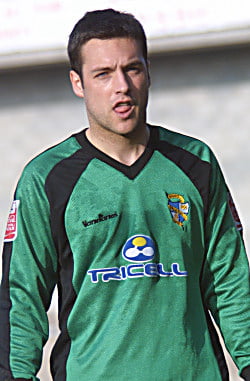 Are you happy with your time so far at the club?

There’s always room for improvement but I’m pretty pleased with the way things have gone so far.

Who’s been the biggest influence on your career?

Obviously success in this game is a lot to do with who you’ve got around you advising you and helping you. From a really early age my parents were totally supportive, driving me to games and training and stuff. I’ve been lucky enough to work with some great coaches too and obviously I owe a debt to Brian Horton for showing faith in me and giving me my debut.

Would you like to play in a higher division?

I’m looking to make the step up to Premiership football as soon as possible. I’m happy at Vale, but with the ITV money falling through no club can afford not to listen to offers. If a top club came knocking then maybe the money would be too vital to resist.

What are your career ambitions?

Every player has ambitions of becoming an International and I’m no different in that respect. ‘Keepers don’t reach their peak until their early thirties and having represented England at under-15 level I’d love to add to that one day.

Who are your goalkeeping heroes?

David Seaman’s as good as you get. Even at his age now he’s still the most consistent ‘keeper around. I think that’s really important – it’s all right being flashy and making saves that look good but you’ve got to be solid first and foremost, make no mistakes.

What have been the highs of your Vale career so far?

Playing in the Millennium Stadium in the LDV final and beating Stoke at the Britannia stadium in the league last year are a couple of the highlights, but promotion would definitely be a result.

How do you think the team will do this season?

For this year our target is the playoffs – we’ve got a lot of good players here and even if some move on, we have to come out stronger and improve.