Cult hero Tommy McLaren: the late midfielder was brave, totally committed and beloved of fans. Many would consider Tommy to be Vale’s ultimate cult hero. 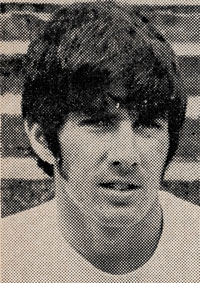 Tommy McLaren arrived at Vale at a time when the club were on the verge of their darkest hour. One of half a dozen promising Scottish youngsters, Tommy joined a Vale where Sir Stanley Matthews was facing the impossible task of meeting massive expectations without promised resources.

The young Scottish midfielder was one of a number of youngsters that was recruited by then Vale manager Stanley Matthews in 1967. He was one of six Scottish players to be employed by the club.

McLaren forced his way into the first-team in the 1969-70 season and was a regular from that point onwards. A number of whole-hearted performances soon endeared himself to Vale fans.

He went to the United States to play for Portland Timbers on loan from May to August 1975. He then returned to play for Vale until he was released in 1977. Tragically, he was found dead in his car in 1978 aged just 29.

Ray Williams was a former teammate of McLaren and he told OVF: “Tommy became a legend at Port Vale not because he was a great player but because he touched everybody that he came in contact with.

“He had a unique personality and lived life to the full. On the pitch he played to win and the fans loved his commitment. He excited them with his dribbling and made them wince with his tackles. He made us laugh in the changing room. You could find him in the Vale Cafe every lunchtime and he had a word for everyone in there.

“We shared a room for five years on overnight stays and got into quite a few scrapes – none of which can be repeated, but he was a true friend and I miss him greatly to this day.

They broke the mould when he died. RIP mate.”