Golden boot Martin Foyle will not score two more vital goals in a Vale shirt than his instinctive double strike against Brighton.

Goals number twenty one and twenty two arrived at the Goldstone Ground to leave Vale’s arch goal poacher to claim a career best goal haul for a single league season.

It is an admirable return for a striker who missed nearly a quarter of the campaign and whose vital goals have pushed Vale into the First Division.

“It was certainly the most important result of my career and one that offers the club a termendous new challenge next season,” commented Martin.

Supporters’ player of the Year Neil Aspin reflected on the promotion season and revealed: “It was a great achievement and one of the finest moments of my career.” 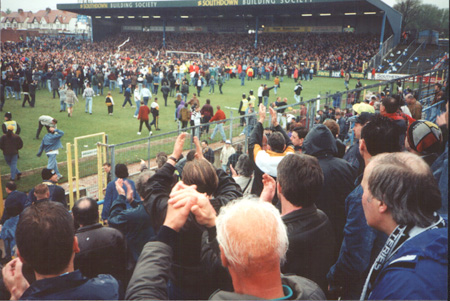 After failure in the Play-Off Final at Wembley to West Brom the previous season (despite a massive points advantage over the Baggies), failure to secure promotion for a second season would be a major blow.

John Rudge issued a simple warning: “Keep our nerve and we will go up. Our entire season hinges on one game but the fate in in our own hands.”

Over 4,000 fans from the Potteries had made the long trip to the Goldstone Ground to watch a match which was seen by a total crowd of 15,000.

Vale did not disappoint. Goals by striker Martin Foyle (twice) and captain Dean Glover cemented promotion for Vale in the most emphatic manner.

It was raining cats and dogs, it was cold and the police wouldn’t let us into to town because of what Stokies had done the previous season!! We got to a service station, god knows which one, cause I was hammered!! There was a sea of Vale shirts there, and just for one day, it felt like I was the supporter of the biggest club in the world!! We needed victory to gain promotion, and none of ya need reminding that we got that victory!!

Then of course there was the Pitch invasion at the end, and Vale fans came from every side of the ground, it was Albion’s last Home game of the season, so it should have been their pitch, but nobody was ruining our celebrations, and after a tense couple of seconds, the home fans joined in the fun with us!! What a great day!! Others to mention are obviously, Wembley, Spurs, Everton and of course Huddersfield last season!! Go arn Vale, gimme a few more to cherish!!