Early years including the club formation and the origins of that name!

What’s in a name?

The club’s unique name of Port Vale has attracted much interest and continued debate to this day. Here is a selection of the most popular theories and it could be that the actual formation is due to one or several of these:

• A Port Vale cricket club was in existence in 1874, which lent its name to the football club.
• Port Vale was formed during a 1876 meeting at the Port Vale House, from where the club took its name.
• The players who founded the club lived near such places as: Port Vale Wharf, Port Vale Street, Port Vale Corn Mills and Port Vale House.
• Nearby Porthill Victoria (for whom founder players John and Enoch Hood may have previously played) played upon a hill, therefore the team of the valley may have chosen Port Vale as “a rather natural choice” of team name
• The name came from a shortening of “Longport Vale.”
• Port Vale was formed from a merger of Wolstanton, Middleport and Burslem St. Paul’s.
• Port Vale was originally a brickworks team. This theory is based on the existence of bricks with “Burslem Port Vale” and “Port Vale” marked upon them. 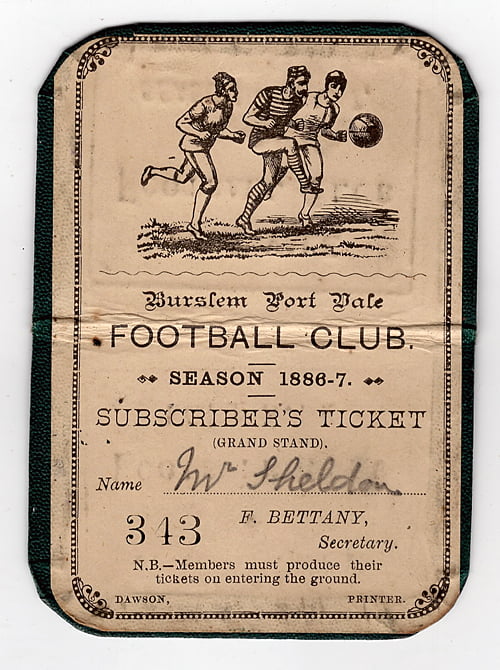 (and handed to this website at our Vale Vaults exhibition)

Enoch Hood – one of the founding members of the club was the captain for the club’s first competitive fixture versus Stoke City in 1879.

Vale started to enjoy some success in the non-league field – particularly in the FA Cup.

But without a permanent base, the club moved grounds several times before settling at the Cobridge Stadium which was to remain their home from 1886 until 1913.

The club had by this time adopted the name Burslem Port Vale and were elected to the Football League in 1891 as members of Division Two. 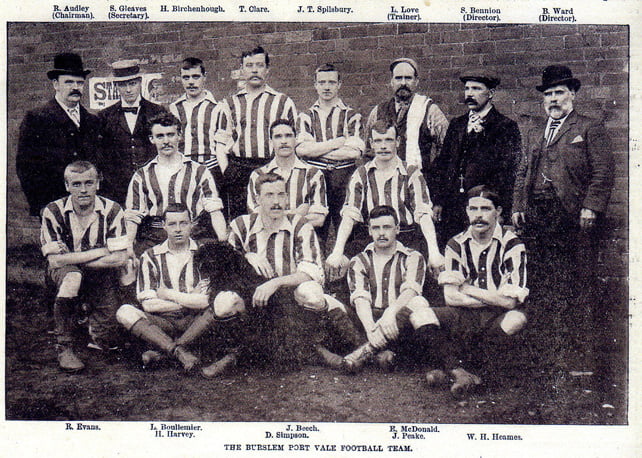 But the eve of Vale’s first campaign in League Division Two was blighted by the death of star player Frank McGinnis at just 23 years of age. The Staffordshire Sentinel newspaper’s obituary described him as “one of the finest centre-forwards in the country.”

Vale lost 5-1 away at Small Heath in their first match with Wallace Bliss scoring Vale’s first-ever league goal. Vale went on to finish the campaign eleventh out of twelve sides.

The next eighteen years were a continuous struggle. The club regularly finished at the bottom of the league and finances were very tight.

In 1907, the club was finally wound up and taken over by Cobridge Church – a local Staffordshire non-league side. In 1912, after a 27 year stay at the Cobridge Stadium, Vale moved into a new home.