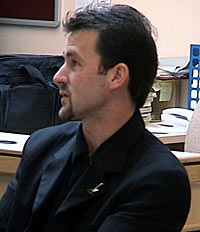 Widdrington re-joined the club in a shock move in January 2005. The former Vale skipper gallantly opted to play for free and help the injury-hit side out.

Widdrington returned to action as a substitute against Brentford and had started the last two matches in the midfield engineroom.

He originally joined on loan on the 1999 transfer deadline day and played his part in keeping the Valiants in the first division.

The move was made permanent in the summer and Widdrington was rapidly promoted to club captain. He was also awarded with the club’s player of the year trophy after his first full season at the Vale. He spent one more season with the Valiants before being released.

After spells for Hartlepool and Macclesfield, Widdrington was made available for transfer in January 2005.

He was coaching with Vale’s Centre of Excellence at the time and made his availability known to Vale boss Martin Foyle. Foyle had no hesitation in signing the experienced professional.