Stellar Group Chairperson Jonathan Barnett has reportedly told the Vale that they can ‘stick their concerns…’ about Steve McPhee’s transfer ‘up their arse.’ Charming fellow isn’t he?| 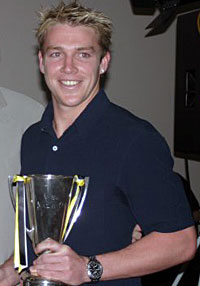 Vale’s player of the season is out of contract

The Valiants have reportedly contacted the Football League as it believes Steve McPhee’s agents, the London-based Stellar Group, may have a conflict of interests, having struck a marketing and player-transfer agreement with Beira Mar.

“Port Vale are a two-bob operation and we are a major company. Their concerns they can stick up their arse.”

“They might consider us a two-bob club but they have made their money from clubs like Port Vale and they wouldn’t exist without us. This shows their attitude, not only towards football clubs but towards their players and the paying public.”

The Stellar Group also have Vale players Michael Walsh and Billy Paynter on their books.

It hardly goes without saying to mention that Barnett never made any negative remarks about Vale’s operation when Billy Paynter (a Stellar Group client) recently agreed a new lucrative contract.