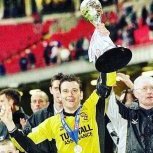 BBC reporting that all elite football is suspended. So Stoke are playing then.

So all football suspended, so for a change I started talking to the wife and found out that she got made redundant from Woolworths.

Going up this season is a strange one. Despite promotion, you've got to cut costs, lost players, and have no real celebration. Maybe a brief 'get in' but by tomorrow it'll all seem meaningless ag