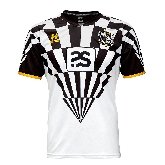 The uproar over the migrants arriving in their inflatable rafts makes me absolutely piss myself. I'm sure I'd be labelled a naive loony lefty for the fact that I feel desperately sorry for anybody who