First of all, it’s worth paying credit to Cambridge. At the start of the season most people would not have picked them to be topping the League Two table but they are a well organised side with pace and power plus the two best players on the pitch in Paul Mullin and Wes Hoolihan. They looked full of confidence after their recent run of form and Vale sadly didn’t have an answer. 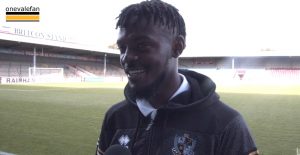 So how many has Nicky Maynard scored this season? Theo Robinson’s arrival was criticised by some expecting the more high profile name of Maynard, but I think Theo is showing signs of being the club’s number one striker. He’s top scorer already but he also showed good awareness and intelligence playing upfront. The question now is whether he continues to do so alone or in partnership with another forward?

Kettle off the boil

If it’s not nice seeing your side lose, it’s even worse when you see your side lose with a finicky, attention grabbing official in charge. For me, the best referees are those who let the game flow and are unobtrusive. Sadly, Mr Kettle is the exact opposite. His “performance” (and you may argue it was a performance in more ways than one) only added to the frustration on the night.

For all the praise lavished on the Vale backline, this is a defence which is now conceding penalties on a regular basis. Tuesday’s game was the third time in the last four League game that the Vale defence has conceded a spot-kick. With it, Vale’s run of clean sheets has also ended. After three games without conceding, this is now five goals conceded in four games. The defence is one of Vale’s strong points and it goes without saying that if they can cut out the mistakes and start building a run of clean sheets again then the side will start picking up points.

Vale would benefit from an in-form Scott Burgess

Last season, commentators often said how it was tricky to tell Jake Taylor and Scott Burgess apart as they looked and played the same. This season with Taylor elsewhere the onus was on Burgess to continue his fine form by himself. However, he’s had a slow start to the season and with Taylor no longer around it means the midfield is missing a spark. Danny Whitehead is clearly a good squad man and resilient operator while Manny Oyeleke is an asset when fit, but how John Askey must be hoping Burgess turns his form around soon.

Would earlier changes have helped?

Once again I come to a point I made in the last game? Are Vale too slow to try and force the issue? The second-half display on Tuesday was too laboured and the final ball was wasteful. Would a switch such as Scott Burgess for Danny Whitehead earlier in the half have injected more guile? It’s fair enough to throw on the subs in the dying moments and play with three forwards in the closing stages but rather than wait till then would an earlier switch have been a better option? I admit this point comes with the benefit of hindsight but it’s the second game in a row that I’ve made it.