Port Vale’s time as a League club may only have lasted four seasons if it wasn’t for an astounding FA Cup win in 1898.

The Valiants had failed to be re-elected to the League in 1896 after struggling for some years in Division Two. However, even in the non-league Midlands Division, the press reported that the club had fared “badly” and “was likely to pass out of existence.” Finances were so bad, the club had to resort to loans to enable them to travel and fulfil their fixtures. Then came a cup draw against the League leaders Sheffield United.

However, even in the non-league Midlands Division, the press reported that the club had fared “badly” and “was likely to pass out of existence.” Then came a cup draw against the League leaders Sheffield United…

Port Vale had battled into the FA Cup first round but would face a side who had finished runners-up in 1897 and would be crowned Football League champions later that year. Their side contained household names such as Bill “Fatty” Foulkes (pictured right), who played in front of a defence boasting four England Internationals. Upfront were two more England Internationals in Walter Bennett and Fred Priest.

Things looked pretty bleak for the non-league Valiants… but they would put on an astonishing display at Bramall Lane.

Vale stunned the home crowd as they took the lead after just 18 minutes through Ted McDonald and dominated the early play. However, a controversial penalty on the hour mark allowed the home side to draw level. Enter Vale’s hero as goalkeeper Herbert Birchenough (pictured right), a twenty-four year old steam engine maker from Haslingden, made a string of fine saves in the closing stages to earn Vale a shock replay.

The Valiants ground staff spent the four days between the ties giving their Cobridge Athletic Ground a spring clean in readiness for the replay as it seemed a record attendance could be expected.

United prepared for the rematch at their favourite retreat of Chesterfield house and, in the recriminations for their failure, Jack Almond was made the scapegoat and dropped in favour of the Scot, Neil Logan. It seemed clear that secretary manager, John Nicholson and the selectors were not prepared to accept another equally substandard performance.

Wednesday February 2nd was thoroughly miserable – it was bitterly cold and a near gale force wind was blowing. Vale took the field in a change strip of white shirts and blue shorts to allow United to wear their traditional red and white striped shirts.

By kick off there were in the region of 12,000 fans in the ground, the vast majority of them hopeful of a cup shock as only a few hundred United fans had braved the cold to make the journey to Stoke.

Captain Tommy Clare won the toss for Vale and sensibly elected to play with the strong wind at their backs in the first-half and it paid dividends. Vale set about their opponents right from the start and when Billy Foulke’s first goal kick of the day was blown almost back to his own goal, United knew they were in for a torrid forty-five minutes. Sure enough it took the Valiants just two minutes to take advantage of the conditions. McDonald’s long clearance found Heames wide on the left. His whipped crossed evaded the entire United defence to find Dick Evans unmarked to fire back across goal and past Foulkes to put Vale in front. It was a perfect start for the Midland Leaguers but, knowing that United would have the wind at their backs in the second half, it was vital that they got some clear daylight between the two teams by half time.

Vale forced a string of corners as they pressed for the second goal with Dick Evans proving the main thorn in United’s side, even though the Vale’s star striker Daniel Simpson was lacking on the day. Evans forced two good saves from Foulkes while on the rare occasions that United did break out of their half they looked threatening. Kenny McKay was presented with a great chance on the half hour but delayed his shot and allowed Clare and Boullemier to clear the danger. Then John Cunningham was presented with the best chance of an equaliser but hurried his effort wide when under pressure from the Vale defence. The best chance of the half came just before the interval when Dick Evans burst through but instead of shooting, he squared the ball for Heames who was ruled offside before he had the chance to finish off a one on one situation with the United keeper.

Vale led 1-0 at half-time but the home fans expected a difficult second half with the league leaders now having the strong wind at their backs, as they would be attacking the Church end. 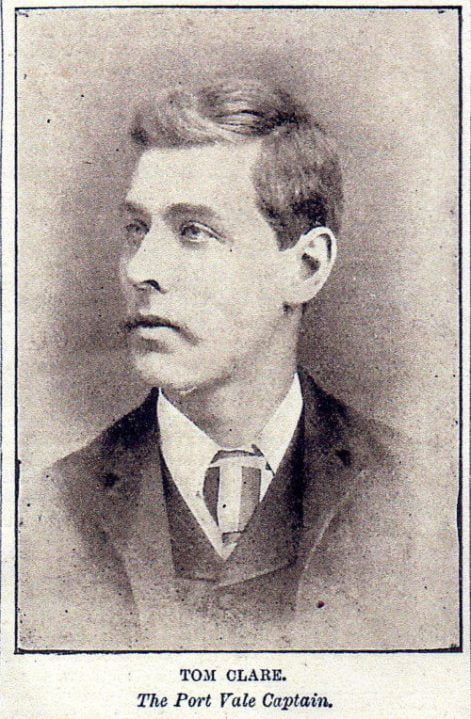 Sure enough the second-half was almost one way traffic as United forced their first corner of the game within two minutes of the restart. The first real scare came from one of their early corners when Tommy Clare was forced to head off the line with Birchenough beaten. The Vale captain was leading by example as, with the wind making it virtually impossible for them to play any sort of decent football, Vale resorted to virtually defending with ten men and punting the ball as far away from goal as they could. The second half grew more frantic in tempo as it progressed, though the quality of football was badly hampered by the wind, and United’s grip on the game became so strong that it wasn’t long before their giant keeper was crossing the half way line to add weight to the strike force. Then came another scare for Vale when John Cunningham went down under a challenge from Clare and the United players turned to Mr Cooper looking for another penalty. However, the referee waved away the protests, to the relief of the home fans while the few hundred United fans booed and hooted the ref for the remainder of the afternoon.

With United almost totally committed to attack Vale were presented with their only real chance of the second-half when another hopeful punted clearance found Lucien Boullemier clear of the back line and with only Foulkes to beat. The keeper raced fully forty yards out of his goal and made no attempt to get the ball as he body checked the Vale defender. It was a blatant foul, which today would have seen an instant dismissal but Foulkes wasn’t even cautioned as Vale had to settle for a free kick with United able to get back to defend.

The game was now drifting into the last ten minutes and every clearance and kick from the Vale players was received with loud cheers from the crowd as an ever more desperate United laid siege for an equaliser. In the eighty-second minute United attacked again and with virtually every player on the field in the Vale penalty area, including Foulkes who had left his goal again to join the attack, Harry Thickett managed to stab the ball home for the equaliser. It was a scrappy goal scored after several attempts to clear had been squandered. A groan went up around the ground as United had surely saved themselves from an embarrassing defeat.

The final minutes were desperate ones for Vale as United swarmed around their goal but seemed unable to create that one clear cut chance that would finish the tie. Then, with only seconds remaining, Kenny McKay saw his chance. His long range shot looked like being the winner until Herbert Bircenough managed to get across his goal to make a superb save to force extra time.

The teams kicked off the extra period with the winter gloom starting to descend on the ground and many of the fans, having no choice but to leave to catch their buses, trams and trains home, sadly missed the great moment.

The winning goal fell to Lucien Boullemier. Boullemier was building a career for himself as a famous ceramic artist and painter, one of his paintings of Queen Victoria being later purchased by the royal family. He was loved by the Vale supporters and management, who provided him with a benefit game when he emigrated to America shortly after the turn of the century but he was later to return, settling in Northamptonshire, where he achieved his artistic fame, going on to have two future kings sit for him. In later life Boullemier showed other artistic talents as a respected member of the operatic society.

He was far from Vale’s only hero though. Club captain Tommy Clare had turned back the clock to his England days a decade earlier in a super performance that saw him carried shoulder high from the field. Clare later became manager of the club. Dick Evans had caused United all sorts of problems, especially in the first half and it was his goals that had forced both the replay and extra time, his brother Jimmy was also in the side.

As always in such games, the keeper received huge credit. Herbert Birchenough had an outstanding second half and extra time, thwarting United time and again. His reward was a transfer to Glossop North End in 1900 when they were in the top flight. As for United after this defeat, the hoots and jibing they must have received three days later at Anfield against Liverpool must have really annoyed them as they won 4-0 on their way to clinching their only ever league title.

What was the Port Vale team?

The 1898 Valiants team that orchestrated the giantkiling consisted entirely of players from the local area.

What did the press say?

Here is a clipping from 1898 magazine The Golden Penny: 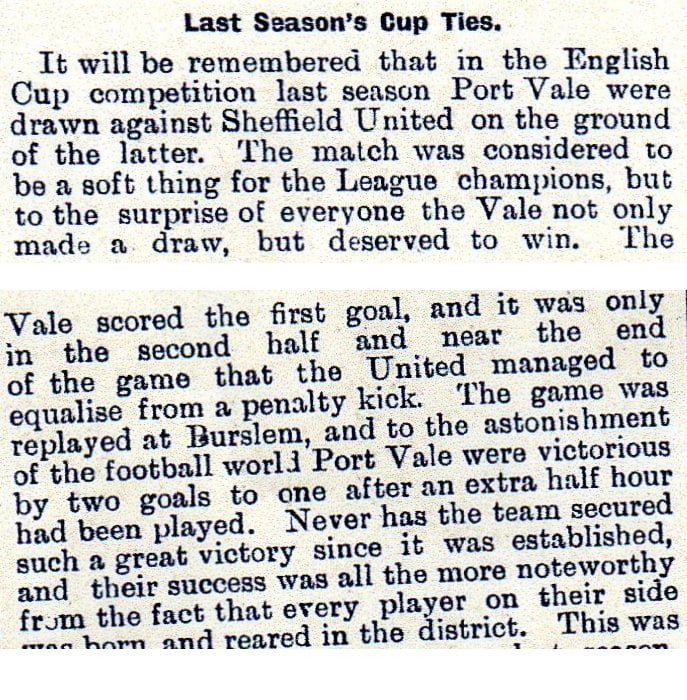 What were the repercussions for Vale?

Vale’s immediate reward for their efforts was a trip to second division Burnley in round two. It was a case of after the Lord Mayor’s show as the Valiants returned from Turf Moor beaten 0-3. It would be nine years before another top flight club visited Vale for a cup tie but their fans would have to wait thirty-eight years to enjoy a giant killing act when Sunderland were beaten in 1936 at the Old Rec.

Without the stunning win, it is doubtful as to whether Port Vale would have had its long history as a League club…

However, the cup win did get them their main objective though as, despite finishing only seventh in the Midland League, they were elected into the Football League second division for the 1898/99 season. Without the stunning win, it is doubtful as to whether Port Vale would have had its long history as a League club.

So why is this Port Vale’s greatest cup giantkilling?

Here are our reasons:

The excellent Giantkillers website had a report on the game from which ours is derived.