Port Vale FC have confirmed that young midfielder Scott Burgess has agreed a new two-year contract which will keep him at the club until 2022.

Having signed on a one-year deal in the summer, Burgess has forced his way into the starting eleven with a string of strong performances, often in partnership with fellow youngster Jake Taylor.

Burgess told the official Port Vale website: “I am enjoying my football. I feel like I have been doing well, the team has been doing well and it is a great place to be around at the minute. The club is on the up so hopefully I can continue doing that.

“I learned a lot at Macclesfield. I was only 19 at the time and now I feel he is really helping me develop both sides of the game. I enjoy going forward anyway and the defensive side of the game is the main thing I have had to improve.

“He has talked about positioning and how I have to be more aggressive, it is only benefiting me.” 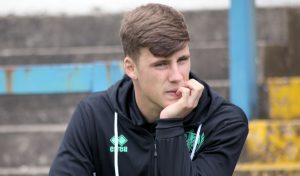