Rob Fielding takes a look at which clubs have done what business in the summer transfer window.

The League Two champions will be one of Bradford City, Mansfield Town, Salford City or Plymouth Argyle. Well, it is if you believe what the bookies tell you. A brief look at sports betting odds for the League Two 2019-2020 season seems to back that up. However, is it really that simple? Here’s a look at who we believe could be battling for top spot and a few clubs who could well struggle.

The battle for promotion

Argyle certainly seem to be going for a tried and tested formula. That is – appoint the manager of a previously promoted side (Ryan Lowe) and then move most of his key players across too (Byron Moore, Will Aimson, Danny Mayor, Callum McFadzean and Dom Telford). However, although Plymouth have undoubtedly put together a strong team on paper, on the pitch it may be a different tale. Not only are the likes of Mayor a year older but they have been uprooted and it’s an awful long way from Bury to Plymouth. So while Plymouth should have the quality to succeed, it’s not entirely a done deal in our view.

Salford City are untested but have enviable financial backing

It’s a similar story with Salford. The club are on the up and are being bankrolled by the “class of 92” but it’s a steep learning curve from being run-away favourites in the National League to the competitive environment of League Two. Forest Green, a similar side in terms of ambition and finance have yet to move out of League Two and it could take Salford a couple of seasons to acclimatise.

Bradford City could actually be the ones to watch

Relegated Bradford City have relied on experience to get them up and running this season. The front-line of James Vaughan and Clayton Donaldson could score goals galore if things click while highly rated loanee Paudie O’Connor has agreed a permanent move to the side.

No-one will particularly enjoy a trip to the Colchester Community Stadium and after a steady mid-table position in 2018-19 this could be the season for the U’s to come good. Yes, they have lost key player Sammie Szmodics but the recruitment of experienced campaigner Paris Cowan-Hall and raw talent Jevani Brown looks interesting.

Mansfield’s capture of striker Nicky Maynard looks like the perfect replacement for Tyler Walker. Providing Maynard stays fit he could once again be a twenty-goals plus forward.

Northampton Town have adopted a revolving doors policy this season but the capture of towering striker Harry Smith from Macclesfield could be a shrewd move.

Plymouth have added Danny Mayor. The veteran was a key figure in Bury’s successful promotion campaign last season and could be as influential this season around. 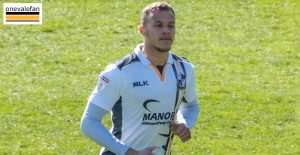 Former Valiants on the move

The battle for relegation

At the other end of the table, Sol Campbell’s Macclesfield side look to be in real trouble. There’s player unrest over unpaid wages while key strikers Harry Smith and Scott Wilson have both left while midfielder Elliott Durrell’s future is also uncertain.

Who else could be battling with Macc at the bottom of the table?

Grimsby, Morecambe and perhaps even the likes of Cambridge United could all be in contention at the wrong end of the table.

How about the Valiants?

We’re big fans of consolidation and continuity. We think it’s far too soon to be dreaming of promotion glory for Port Vale. It’s early days for new owners Carol and Kevin Shanahan and while we think they will steer the club in the right direction, it’s going to take time. So, we’ll settle for mid-table security this campaign.