League Two Port Vale have just experienced one of the poorest seasons in the club’s history but it was very different 65 years ago.

When they visited bottom-of-the-table Notts County on March 2nd, they knew that defeat at Meadow Lane would leave them just two points above the drop zone and facing the huge possibility of demotion to the National League.

Thankfully for all fans of the Valiants, they managed to squeeze a point out of this crucial match and, following an improved run of form by winning four of their next six league fixtures, did just enough to avoid relegation into the unknown.

During a difficult campaign, manager Neil Aspin resigned in early February, who was replaced by John Askey, and a vital 2-1 away win at Northampton Town on March 30th proved pivotal as they finished 20th out of 24 and eight points clear of the dreaded drop.

Back in November, they fell out of the FA Cup at the first hurdle – albeit to League One giants Sunderland who won 2-1 at Vale Park. Despite being the home team in a two-horse race, bookmakers such as bet365 were offering FA Cup betting odds as long as 4/1 for a Vale win that autumn afternoon, which reflected their rough start to the season.

But this was all a far cry from 65 years ago when they enjoyed arguably their best-ever season, which witnessed promotion to the old-style Second Division and, more famously, a run to the semi-finals of the Cup.

To reach the last four, having started out in Round One during November, Vale needed to survive seven matches to set up an encounter with Midlands’ rivals West Brom. Five times they were drawn away in the competition, with the only home tie – other than a replay win over Southport 10 days before Christmas Eve, being a plum fixture against top-flight Blackpool on February 20th.

The Tangerines were the Cup holders and had seven internationals in their side, including Stanley Matthews, but in front of more than 50,000 spectators on a waterlogged pitch, it was two goals from Albert Leake that won the day for the home side.

Blackpool went on to finish the season fifth in the table, while Leake and his teammates headed to Brisbane Road for a sixth-round clash against Leyton Orient. 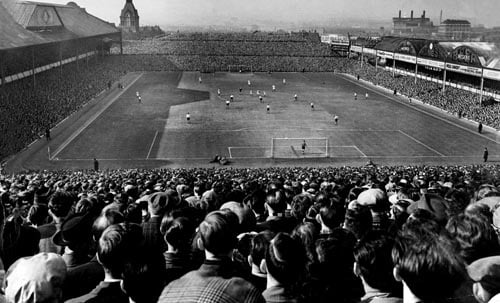 Another bumper crowd in excess of 30,000 saw Leake score the only goal of the game to set up Vale’s semi-final against the Baggies at Villa Park on March 27th 1954.

West Brom were top of the Division One table at the time and were well placed to secure a League and Cup double. Yet again, Leake was on the scoresheet, firing the underdogs ahead just before half-time.

Vale were only 28 minutes from a Wembley final against Preston North End when West Brom managed to scramble the ball home for their much-needed equaliser. And the dream was ended in the 70th minute, when skipper Tommy Cheadle fouled George Lee and, despite Vale’s players protesting that the incident had taken place outside the box, the referee pointed to the spot.

Former Vale striker Ronnie Allen converted the penalty and the Baggies were off to north London on the first day of May. Allen would score twice more at Wembley – including another penalty – in a 3-2 victory over Preston. But they were unable to win the First Division title, finishing runners-up behind Wolves after losing four of their final seven league games.

Disappointed Vale players picked themselves up and went on to win Division Three North by 11 points from Barnsley – without losing a single match at home.