BBC Radio Stoke have tweeted that Port Vale manager John Askey is hopeful of a summer friendly with Championship side Leeds United.

Askey also says a fixture against non-league side Leek Town could also be a possibility.

The club has already confirmed matches against Fleetwood, Burnley, Leek, and Kidsgrove with Leeds United also a potential opponent.#PVFC pic.twitter.com/xNOJE7ajU4

The Valiants have already announced friendly games with Premier League Burnley, League One side Fleetwood and local non-league outfit Kidsgrove.

Leeds, managed by the eccentric Marcelo Bielsa finished in the third place in the Championship table last season but lost-out to Derby County in the play-offs.

Leeds and Vale last met in a competitive fixture in August 2017. The League Cup fixture ended in a comprehensive 4-1 win for the home side as Vale had defender Gavin Gunning sent-off in the closing minutes. 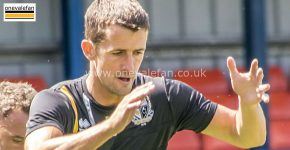 Played for both – Port Vale and Leeds United

There’s a decent number of players to appear for both club. Here’s a small selection:

Neil Aspin: player and manager for Port Vale, Aspin made more than 200 appearances for Leeds and over 400 for the Valiants.

Michael Brown: Just like Aspin, Brown played for and managed the Valiants after a previous playing spell for Leeds.