Matt Carragher, the captain of Port Vale’s 2000 LDV Vans Trophy winning side has sadly died at the age of 40, the Port Vale Supporters Club have announced.

The right-back joined Vale on a free transfer from Wigan Athletic in 1997 and made a total of 220 appearances for Vale, scoring once.

He was Vale’s skipper as the Valiants defeated Brentford 2-1 at the Millennium stadium to lift the club’s second domestic trophy.

He was renowned for playing with a smile on his face but still performing as a professional and that attitude endeared himself to a generation of Vale fans.

Carragher left Vale in 2003 and had further spells with Stafford Rangers and Macclesfield Town.

Our thoughts are with his family and friends. He will be remembered. 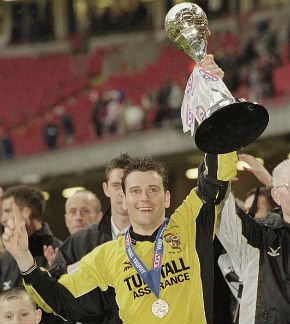